Maintaining a good law and order in the city of Mysore is the main aim for the Superintendent of Police and he is the who is said to be heading the Police force in Mysore. The district magistrate can exercise the general supervision on the jails in Mysore and also on the license for running petrol bunks, cinema, and for LPG cylinder godowns.

The main important role of the revenue department in Mysore is to maintain the land records that include the collection of land revenue and the assessment of it. The Government dues are collected in the form of arrears for the land revenue. The Deputy Commissioner in Mysore is the designated Revenue officer and he is charge of dealing the land disputes in and around Mysore. He has also got the power to manage the public lands and the properties in Mysore. The Tahsildars and the Assistant Commissioners have said to be assisting the land revenue section in Mysore in a good way so that everyone pays their revenues to the Government.

The Mysore City Corporation (MCC) was established in the year 1977 that takes care of the civic administration in the city of Mysore. It indeed oversees the engineering works, water supply, health sanitation and taxation. The mayor is the head of the corporation and he is assisted by the council members and the commissioners. The Mysore city has a total of 65 wards with the elected council members for each and every ward. The council members are known as the corporators and they are elected once in a five year by the citizens who live in Mysore. The Mayor for Mysore district is elected by these council members. During the year 2012, the MCC made an annual budget of about 430 crore that was spent for various projects in and around Mysore. 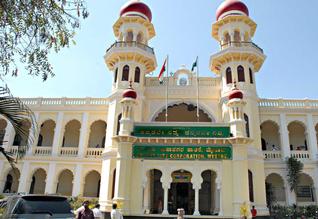 The MCC was referred as the best municipal corporation and it had bagged the Nagara Ratna award during the year 2011.

It takes care of the urban growth in the city and it said to be headed by the commissioner. The main activity of MUDA is to develop new layout and make roads, plan for a new town, land acquisition and much more. The Outer Ring Road created by the MUDA has lead to an ease in the traffic congestion for the Mysore city people. The electric supply in Mysore is handled by the Chamundeshwari Electricity Supply Corporation.

Mangalore gets its drinking water from both the Kabini and the Kaveri river. The city was got developed with the Belagola project that was commissioned in the past generation. Mysore recorded the usage of water per days as 42.5 million galls during the year 2011. The whole city is connected to the underground drainage system. The sewage from the Mysore city drains into the valleys. Mysore has been recorded as the second cleanest city in the state of Karnataka during the year 2010 and it still holds the same record.

The Mysore citizens are responsible for electing four representatives for the constituencies,  namely, Krishnaraja, Chamaraja, Narasimarana and Chamundeshwari. The elected people represent the Legislative Assembly of Karnataka. Mysore also elects a member of the Indian Parliament. This one member represents the Lok Sabha in the Indian Parliament. The politics in the Mysore city have been dominated by three different political parties,  namely, the Bharatiya Janata Party, the Indian National Congress and Janata Dal.

The Mysore Urban Development Authority has made a proposal for a new metro rail system in Mysore. The MUDA has requested the officials from the Mass Rapid Transport System to implement the metro system in Mysore. The survey is still in process and the metro rail system can happen in Mysore in the near future. A heritage park is said to be created in the 35 acres that is found around the Hotel Lalitha Mahal Palace. The park will have the models of the famous heritage structures that originated from the city. The underbridge construction in between the Vidyaranyapuram and Kuvempunagar railway station has been made in the last few days. A swimming pool has been constructed in Vijaynagar stadium that was done on a budget of 21 crore Indian Rupees.

Members of Parliament from Mysore

The Mysore District Court Complex is said to be managing the jurisdiction of Mysore. The District and Sessions Court in Mysore has a Judge who gets appointed by the High Court. The Sessions Court is located in the District headquarters. The Mysore city has got nine courts for Judicial Magistrate First Class and it takes care of the Juvenile cases. The present District Judge is Smt. KS. Mudagal. The district judge is responsible for the Sessions court also. Mr. NK. Patil is currently the Administrative Judge for the Mysore District.


Who's Who in Mysore

Members of the Legislative Assembly

All of the above important people do their duties with utmost dedication and help the city to enjoy a good quality life.

The state of Karnataka occupies an important place among the states of India. Bangalore can be described as India’s IT hub. Mysore away from Bangalore for more than 140+ km is an important tourist location in Karnataka. Mysore has numerous names. It is called the “City of Palaces” or the “Sandalwood City”. The name Mysore is originally derived from the word “Mahisura” and the British anglicized it into Mysore during its rule. The city is under spotlight during the Dusshera festival and for its Mysore silk sarees which are famous over the world.