The Chamundi Temple Mysore is considered as the abode of the Mysore Goddess Chamundeshwari serving as the presiding deity at Chamundi Temple. The shrine of the Devi is located at the top of the Chamundi Hill and it was originally called the Mahabalagiri. The shrine is located at an altitude of 1073 feet imposing a scintillating view of the city that lies below. Chamundi Hill summit is about 13 kilometers away from the city of Mysore and it takes approximately 20 minutes to drive uphill. The road towards the hill consists of hairpin bends making the journey quite interesting and adventurous for the visitors. There are thousand steps that people can climb and use as an option to reach the Chamundi Temple. In the middle of the steps, lies Lord Shiva’s mount called Nandi that has been sculptured beautifully. The sculpture is about 7.6 meters long and 5 meters high and is a great attraction for the tourists and pilgrims who worship Nandi as well. 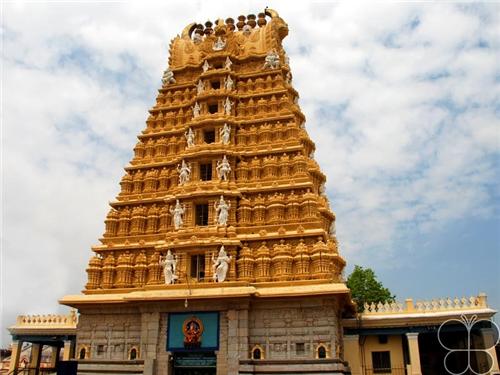 The structure of the Chamundi Temple Mysore is quadrangular. The entrance of the temple possesses a pyramidal tower known as the Gopura. This tower has been designed intricately in Dravidian style and it also consists of a Lord Ganesha statue that is very small and is found on the doorway. There is silver plating found on the doorway and it also consists of images of Goddess Chamundeshwari in varied forms. Lord Ganesha’s statue is located on the right hand side of the doorway because Lord Ganesha is considered as the remover of major obstacles in the life of a person.

The interior of the temple is comprised of the statue of the Goddess in stone. The statue is decorated on a regular basis and is even worshipped by a large number of priests regularly. Since Goddess Chamundeshwari served as the family deity of the Maharajas of Mysore, they endowed several precious gifts to the Goddess that are still found in the temple. In the room that is found just in front of the main temple, there is a statue of the Maharaja Krishnarajasagara Wodeyar III which is six foot long. The statue of the Maharaja shows the Maharaja standing with folded hands, draped in religious clothes along with his three wives who gave their names carved on the pedestals. The repairing of the Chamundi Temple Mysore was carried out in 1827 by Maharaja Krishnaraja Wodeyar. It was during the repair work that the enormous tower was built on the Chamundi Temple. A large chariot made out of wood has also been gifted to the temple by Maharaja Krishnarajasagara. This chariot is called the Simha Vahana and is presently used during the car festival known as Rathotsava.

Art, Architecture and Design of the Temple

The Chamundi Temple is an excellent piece of architecture and style practiced by the Dravidians and it is only because of this reason that the temple ranks among the best temples found throughout India. The temple serves as a dedication to Goddess Chamundeshwari who is considered as an incarnation of Kali. The importance and the significance of the temple for the royalties of Mysore have been proved by the main sanctum of the temple. Historical importance of the temple can be gauged out from the fact that the Great Maharaja of Mysore, Krishnarajasagara gifted the temple with various kinds of precious gifts including a chariot made out of wood. The temple is supposed to be auspicious for the people of Mysore and Karnataka but thousands of people from across the globe also visit the temple during Dussehra and other festivals that are celebrated at the temple.

The Chamundi Temple Mysore is a wonderful work of art and the beauty and importance of the temple cannot be overlooked. The main reason behind the popularity of the temple is the statue of the deity and the Maharaja Krishnarajasagara Wodeyar. People who visit the temple, make it a point to pay regular visits because of the divine and the scared ambiance and environment of the temple. It is truly a place that can offer peaces and sanctity at its optimum.

On the top of the main temple or the sanctum lies the Vimana or the small tower that is visible even from the outside of the Chamundi Temple. Special prayers and offerings are bestowed on Goddess Chamundeshwari during the festival of Dussehra that carries on for ten days. Various types of musical performances are held at the temple premises and the Vedas are also chanted by the priests during Dussehra. After Dussehra, the car festival known as Rathotsava is conducted on Ashwayuja Pournime which is considered as an auspicious day for the festival. The jatra or the Rathotsava is an annual festival of the area that is celebrated at the hill top. This festival is followed by the floating festival known as Theppotsava which is held during the night. Thousands of devotees are attracted to the temple because of these festivals. The pooja timings at the Chamundi Temple Mysore are 7.30 am to 2 pm, 3.30 pm to 6 pm and 7.30 pm to 9 pm.

Chamundi Temple as a Tourist Attraction