Dams and Canals in Mysore

There is one major Dam in Mysore city – The Krishna Raja Sagar Dam, popularly known as the KRS Dam. This Dam is built over the river Kaveri. This Dam has a historical significance because it was the first irrigation Dam built in India and hence, it revolutionized the agricultural world. 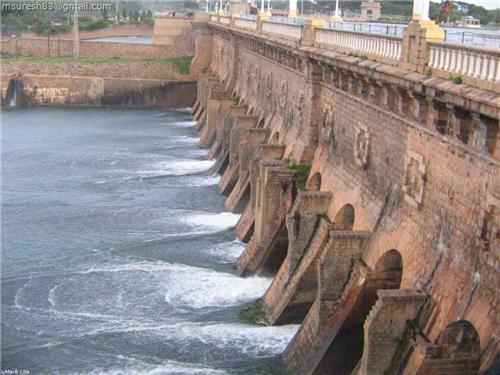 The KRS Dam was financed by the then king of Mysore – Krsihnaraja Wodeyar. And hence, the Dam was named after this king as Krishna Raja Sagar Dam. The great engineer who designed this Dam was Sir M. Vishweswaraiah. He not only designed the Dam’s architecture but also converted the surroundings into a beautiful place. If you ever happen to visit this beautiful Dam, you would be able to enjoy in the beautiful garden beside4s it. There are musical fountains and ponds in this garden which further add to the beauty of the Dam. The vibrant music let out by these fountains makes people sing and dance with joy.

Location of the Dam

The KRS Dam is located in the north-western part of the city. Kaveri River, Lakshamanatirtha River and the Hemavati River meet at the site where this Dam is constructed. Also, the city of Bangalore is connected to this Dam. A boating pond has also been created here so as to allow people enjoy to the maximum. Sitting in a boat, you could marvel at the beauty of the Dam.

Significance of the Dam

The Krishna Raja Sagar Dam is about 8600 feet in length and 130 feet in height. The reservoir attached to the Dam covers an area of about 130 kilometer square. The KRS Dam has automatic sluice gates and it was one of the first Dams in the world to use such an advanced technology. For the Mysore district and the Mandya district farmers, the KRS Damis the most important water source for irrigation purposes. It can be rightly said that this Dam has brought fortune and prosperity to the farmers of Mysore district. Various other Dams in India are also following the model of KRS Dam, such is its elegance.

Visvesvaraya Canal is built alongside the KRS Dam and it is main water channel of this Dam. The canal extracts enough water to irrigate around one thousand acres of land. Various crops such as sugarcane and rice have been irrigated using the water of this canal.

The Brindavan gardens are situated just below the KRS Dam and hence, this dam has become a popular tourist destination and a picnic spot for the local people. The colorful lights in the garden look amazing especially in the evening time. According to a survey, people visit these gardens during weekends most of the time. In the monsoon season, the scene becomes even more admirable and if you visit this place somewhere between June and July, you would love the scenery.

The design of the KRS Dam along with the Brindavan gardens reminds one of the elegant Mughal gardens. The breathtaking view is enjoyed by everyone who visits here.

There is just one Dam in the city of Mysore, but this one Dam has been viewed as a model for all the other Dams in the country – the Krishna Raja Sagara Dam.