Every place has market areas or places. However, there are certain market places that become quite popular. If it’s Chandni Chowk in the capital city of Delhi, Zaveri bazaar in Mumbai, there is also extremely famous market place in the city of Mysore. It is the Devaraja Market located on Sayyaji Rao Road in Mysore. 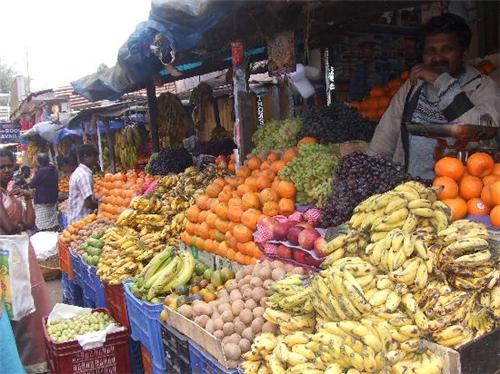 For a typical ambiance of a market place, where you may witness a deluge of people looking out for all sorts of items, the Devaraja Market is an ideal representation of the same. The rich history of the market is evident from the fact that it is over 100 years old and still carries the same aura that it had since its inception.

There are two main entrances to the market. One is through the northern end, which is at Sayyaji Rao Road, and the Southern entrance is through the Dhanvantri Road. There are other entrances to the place from in the middle as well. However, it is advised for visitors to enter from either the northern or southern entrance in order to explore the entire length of the market. The northern part of the market is famous for fruit selling while the southern part is famous for its vegetables.


Northern Part of the Market

The northern part of the market is famous and filled with fruit sellers. The most famous fruit sold here is the banana as across most parts of South India. There are other fruits which are sold as well. During the summer period the market is flooded with truck loads of mangoes. The southern part is a busier part since it sells vegetables of all kinds. The hustle and bustle in the market is evident from the fact that there are over 800 traders across the length of the market.


Middle Part of the Market

Apart from the northern and southern section of the market which is famous for its fruit and vegetables, the middle part of the market is known for its flower selling shops. There is a large variety of flowers that get sold in this section. The flowers that are sold here are the brightly colored Marigold, Rose, Jasmin and Chrysanthemum. The garland making is an artistic affair. The making of the garlands is done right in front of the customer’s eyes.

Like any typical market across the country, the prices shoot through the roof during the times of festivals. The commodities which see a rise are fruits and flowers which see a heavy demand during that time. The peak business hours are during mornings and evenings, so are the week-ends and the festive days especially during the festival of Dushera, which is a landmark festival celebrated in Mysore.

Explore more about Shopping in Mysore