Drama and Theatre in Mysore

Mysore is a popular city in terms of culture and tradition. The culture of Mysore is portrayed in the form of theatre and drama activities that takes place in and around the city. The Mysore city was once ruled by the King and there is a big history behind the formation of Mysore City in the state of Karnataka. The culture that was followed by the King is portrayed through the drama and theatre activities so that the tourists who would visit Mysore can know about the city and the wealth it has in the form of tradition and culture. 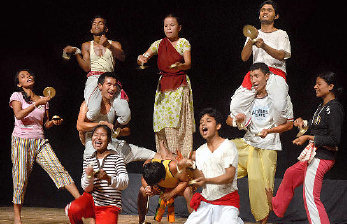 Many theatre groups have come up in Mysore in past few years. Many drama and theatre groups are earning good name in and around Mysore city. They act their plays in various popular auditoriums.

The Rangayana drama institute was established by the State Government of Karnataka in the year 1989 and it was created to promote the play and stage crafts in the city of Mysore. Rangayana is one among the famous theatre institute that operates from the Mysore City. It is an autonomous cultural institute that has been in the teaching theatre activities to students from all over India. This organization has a professional repertory company and a research center with the theatre institute.

The Rangayana offers various courses that teach about stage craft, presentation and preparation for a play and much more in the regional language Kannada. It is said to be conducting various programs that are made to promote the Kannada theatre group. The theatre festival from Rangayana is a very famous event that has made many people from abroad to visit Mysore to witness the play. The Rangayana is the one and only Government sponsored institute that has undertaken new projects to introduce the theatre play among the kids.

The Rangayana organizes many theme based festivals that is said to be attracting many drama and theatre enthusiasts from all over India. The theatre groups perform in various Indian languages. The festival also has the handicrafts exhibition, art exhibition, book exhibition and the food festival that adds up to the drama feast in Mysore. The seminar interaction with the famous drama artist from Mysore has made many new talents to learn the drama activities in the past few years. The annual tour conducted by Rangayana has been well received by the local people. This type of Ranga Yatre happens once in a year and the tour covers all the towns in the state of Karnataka.


Other Drama Institutes in Mysore