Mysore is comprised of a population that is an assimilation of people belonging to different religions and possessing different beliefs. The festivals that belong to the people of various religious communities in Mysore are celebrated with great religious zeal and equal passion. However, the city has always upheld and the people have always tried to meet up with the traditional culture that existed in the past during the reign of the royal families in Mysore and this is the reason why Ugadi and Dasara are the two festivals that people make it a point to celebrate since they are the festivals that are being celebrated in Mysore since centuries. These two festivals hold a very special position among the various festivals and fairs that are organised in Mysore. People of Mysore celebrate all the festivals and fairs with dedication and religious purity and this is something that portrays the strong hold that traditional culture has on the people and the society that is backed by modern civilization. 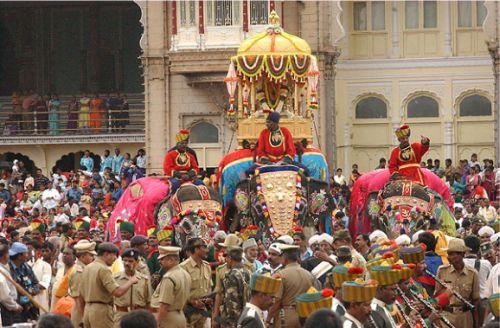 Dasara celebrations are synonymous with Mysore. The Dasara festival is celebrated in Mysore during the months of September and October that largely depends on the Hindu calendar and the auspicious days that mark this festival. Various types of cultural and religious programs are included during the celebrations of Dasara festival that lasts for ten days in Mysore. Previously, the ninth day known as Navratri and the tenth day called Vijayadashmi used to be celebrated in Mysore with royal grandeur but that grand method of celebration is no longer found. However, the people of Mysore still make it a point to make the celebrations as grand as possible so that huge crowds are attracted towards Mysore during Dasara. People are greatly attracted towards Mysore during Dasara and the city witnesses tourists from all over India and also abroad who visit the city for getting the sight of various special programs held during Dasara celebrations and also the other tourist attractions found in the city. The procession that is arranged on Vijayadashmi that is the tenth day of the festival is also a great attraction for the tourists coming to Mysore.

How is it Celebrated?

The great palace in Mysore remains illuminated during the ten daylong celebration of Dasara. There are performances by renowned musicians and dancers from the State and even from outside, arranged in the palace grounds. The palace remains open for general public during the festival and at the same time the visitors at the palace also get the chance of having a look at the royal throne that is displayed at the palace. The State Government makes arrangements for fold dance, music, dance, wrestling, sports competitions and doll shows during the Dasara celebrations. An exhibition is also conducted in Mysore during Dasara and this exhibition continues for two months at a stretch. The exhibition is known as Dasara exhibition and it is held at Doddakere Maidan. Several industrial and business houses take part in this exhibition apart from various boards, Government departments and corporations that set up pavilions for highlighting the progress made in different fields of work. The celebrations are concluded with a beautiful procession on the last day of the festival known as Vijayadashmi. The procession includes police bands and units, floats, armed police, mounted guards and various traditional items belonging to royal family. Main attraction of the procession is the golden idol of Goddess Chamundeshwari placed in a howdah atop an elephant that is exclusively decorated. The Forest Department also gives in several elephants that are used in the procession that stars from the Palace in Mysore and ends at Banni Mantap which is a distance of about 2.5 miles. Besides several kinds of programs, special religious ceremonies and worship are arranged for at different other temples within the city. The main temple that is worshiped and remains flocked with devotees and tourists from different part of the world is the Chamundeshwari temple atop Chamundi Hills.

There is a historical as well as a mythological background associated with the Dasara festival. The origin of the festival is found in Mahabharata, the grand epic. The Pandava brothers in Mahabharata are said to have celebrated this festival in order to mark the victory of holiness over wickedness. At present, ‘Ayudha Puja’ is celebrated during the festival which is a puja done by the Pandavas when they came out of their banishment and worshiped their weapons. Devi Purana also forms the inspiration behind the celebration of Navratri and this festival is celebrated as per the rituals that have been mentioned in the Devi Purana. Historically, the festival celebrations can be associated with Vijayanagara rulers in Mysore. The emperors of the Vijayanagara Empire celebrated Dasara in a very grand manner. Visitors like Fernao Nuniz, Robert Sewell and Domingoes Paes who visited Mysore at that time have written in their works about the grand way in which the Vijanagara rulers celebrated Dasara at Vijayanagara. Hampi was the capital of Vijayanagara and the famous Mahanavami Dibba stands as the remnant of the celebration of Dasara in Vijayanagara. After Hampi’s destruction, the festival celebrations lost its zeal but it was revived by Raja Wodeyar in 1610. Raja Wodeyar also laid down the rituals and the tradition in which the festival would be celebrated by future rulers.

Dasara celebrations that were carried out majestically in Mysore during the reign of the rulers of Mysore find a mention in the classics written by Kannada poets Chikka Devaraja Wodeyar and Kanteerava Narasaraja Wodeyar. Infact, Dasara was celebrated in a grand manner even during the rule of Hyder Ali at Srirangapatna, the then Mysore capital. The festival was celebrated by the Wodeyar Kings like Krishnaraja Wodeyar III and the rulers who acquired the throne after him until the rule of the last ruler Jayachamaraja Wodeyar. After the princely rule was abolished in Mysore, the Dasara celebrations stopped for a certain time frame and the trend began to suffer at the hands of the British. However, the festival was again revived by ‘Nada Habba’, the State Government. Srikant Datta Narasimharaja Wodeyar, the shoot of the royal family in Mysore, still celebrates the Dasara festival in its traditional form at the Mysore palace. He also holds a private durbar and even the procession on the last day of the Dasara festival. 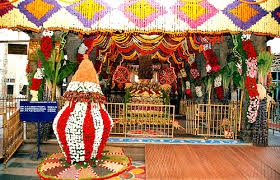 Ugadi festival in Mysore is celebrated in early April or in the second half of March. This festival is celebrated with great show and pomp all over the state of Karnataka. The people of Karnataka celebrate this festival with complete devotion and utter joy. The festival is celebrated as New Year Day known as Kannadiga. Ugadi is a festival that is not only celebrated with happiness and fervor but the day is regarded to be very auspicious and favorable for starting with new activities. The arrival of spring season is also marked by the festival which is accompanied with verdant meadows and colorful flowers indication the new formation of life. The people wash and clean their houses, draw Rangolis that are very colorful, garland their house entrance with leaves of mango, prepare delicious recipes and buy dresses for the festivities. The people of Mysore also celebrate this festival with great fervor as they form an important part of Karnataka. This festival serves as a means of adding bright color to beautifully landscaped Mysore. 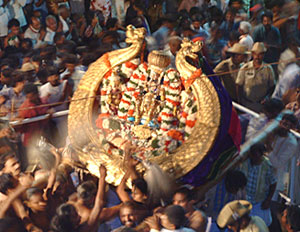 Vairamudi festival is the most celebrated and admired festival in Mysore. This is a festival that is celebrated in March every year and it is held on the sixth day of the Brahmotsavam of Lord Cheluvaraswamy held in Melkote. The festival has been named after ‘diamond crown’ and it is a festival that is celebrated with great splendor and dedication. During this festival, the idol of Lord Cheluvaraswamy is beautifully adorned with a crown that is diamond encrusted and all the other temples in Mysore are extravagantly decorated and illuminated with candles and oil lamps. Storm of supporters and devotees from different parts of the world come to Mysore in order to be a part of this festival.