Mysore’s airport also known as Mandakalli Airport which was inaugurated in 2010. The infrastructure of the airport has been updated to meet the demands of modern times. But this airport only started functioning from January 2013 when Kingfisher airlines flew its first flight to Chennai. Over the years the significance of an efficient airport system has become essential as Mysore has become a tourist city and its economy is opening up. Thus it becomes important that travelers arriving to Mysore from other parts of India and the world enjoy the superior experience of air travel. Otherwise traveling by trains and buses could be cumbersome for them. The Karnataka Government with Mysore City Corporation (MCC) has understood this and sanctioned the lengthening of its runaway in the near future. 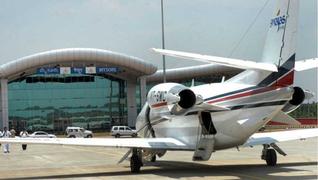 Kingfisher Airlines earlier had daily flight from Mysore to other parts of the country like Bangalore, Mumbai and Chennai. But since the occupancy was less, the flights had to be scrapped off. Private charted flights have been undertaken in Mysore airport from 2010 onwards.  Spicejet from 2013 onwards has a daily flight from Mysore to Bangalore and Chennai.

From Mysore to Bangalore

Travelers from Mysore can fly to the capital city of Karnataka four times a week. The weekdays are Monday/ Wednesday/ Thursday and Friday. The departure time for the flight is 1:30 PM in the afternoon.

From Mysore to Chennai

Spicejet has minimum one flight to Chennai every day and the flight timings is at 10:40 AM in the morning. Additionally there are two more flights to Chennai from Spicejet which is at 1:30 PM and 3:30 PM respectively. Spicejet flight SG3306, flies to Chennai on Mon/ Wed/ Friday. While Spicejet plane SG3416, flies to Chennai, on all days except Monday and Tuesdays.

From Mysore to Hyderabad

The popular airlines company in Mysore Spicejet has two regular flights to Hyderabad, on a regular basis. The first flight timing is at 10:40 AM in the morning and operates six days a week excepting Thursdays. The second flight departs at 4:30 PM in the evening and operates five days a week with the exception of Tuesdays and Saturdays.

From Mysore to Delhi

Delhi being the capital of the country would have many passengers who would fly to Delhi for both personal and professional reasons. Understanding this importance Spicejet has two flights to Delhi. The first flight operates on a daily basis and the flight departure time is 10:40 AM while the second flight departs at 4:30 PM and operates six days a week.

From Mumbai to Mysore

Spicejet has two flights to Mumbai on a regular basis, excepting on Tuesday and Sunday. The departure time for the first flight is 10.40 AM and the second flight timing is at 4:30 PM in the evening.

From Mysore to Pune

Pune is a bustling city in the Western part of India. Spicejet has one flight from Mysore to Pune on Sundays at 4:30 PM.

Mysore also connects with various international cities of the world like Singapore, KL and London.

From Mysore to Singapore

Mysore travelers who want to travel to the business hub of South East Asia, Singapore have to first fly to Bangalore in a Spicejet plane which departs from Mangalore at 4:30 PM in the evening. The passengers have to wait for 15 hours and then catch the Jet Airways flight to Chennai at 8:30 AM in the morning. This would be their second city stoppage. Then at 12:00 PM sharp noon time the same plane departs for Singapore and lands at Singapore around 6:50 PM in the evening as per Singapore timings.

From Mysore to Dubai

There are many travelers from Mysore to Dubai. Spice Jet flies Mysore travelers to Delhi after two Indian city stoppages. The first stop is at Bangalore and the flight from Mangalore departs at 4:30 PM. There is a stopover at Bangalore for over three hours. Then from Bangalore the Spicejet flies to New Delhi at 9:05PM. The passengers on their way to Dubai stay overnight at Delhi and the final phase of their flight from Delhi to Dubai starts at 11:15 AM. The planes are changed in Delhi and Jet Airways take over the final leg of the journey. The travelers from Mysore reach Dubai at 1:35 PM according to Dubai local time.

From Mysore to Bangkok

Bangkok in Thailand is another most visited city by tourists from all over the world. Spice Jet from Mysore leaves for Bangalore at 4:30 PM and then after a few hour stoppage leaves for Delhi at 9:05 PM. The passengers stay overnight and there is a change of plane. IndiGo plane departs for Bangkok at 5:50 AM in the morning and reaches Bangkok at 11:35 PM as per local timings.

These domestic and international flights from Mysore connect the residents of Mysore to various parts of the India and the world. It also creates a boon for tourism in Mysore.

Comments / Discussion Board - Flights from Mysore