It is learnt that there are 3,000 to 4,000 foreigners living in Mysore on a tourist visa and have enrolled in different Yoga Schools. They manage to find guest houses in Lakshmipuram, Contour Road, Vijaynagar, Kuvempunagar, Bogadhi, and V.V Mohalla, Gokulam and Yadavgiri. These foreigners appear to police stations and later they disappear. It becomes difficult for police to trace them. Police has instructed Yoga schools to teach yoga to only those who arrive on student visa. Police have also instructed hotels to provide details of their foreign visitors. It is found that many foreigners visit Mysore on a rotational basis and run a mega business of running guest houses. They confined these guest houses to foreigners only because they prefer to stay together for security reasons. Once they get the certification from these yoga schools, they earn substantial amount back home. 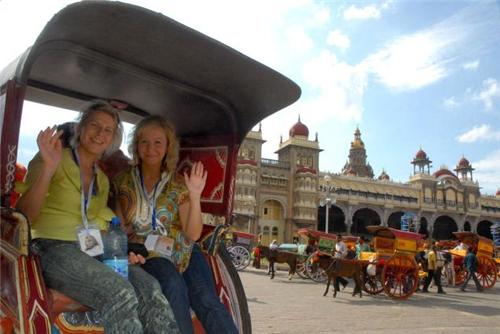 Attractions for Foreign Tourists in Mysore

To Benefit from Ayurveda: Foreigners are more interested in exploring ancient Ayurvedic medicines and Indian culture. Dussehra festivities or Mysore Pak (famous sweet) hardly lures foreigners. They concentrate more on Yoga education. They are ready to pay hefty course fees of 50,000-60,000 for learning Yoga. These foreigners have realized that they will get excellent returns when they complete the Yoga classes. Foreigners have discovered a remedy in Yoga and Meditation to treat modern day’s exhaustive stress. The exotic culture of Mysore helps foreigners to go vegan and a teetotaler.

To Benefit from Yoga: A trip is totally lost without paying a visit to this place. Mysore is a hub for yoga and meditation. It has several wellness centers. Mysore generates good revenue for the state.
Yoga is an act of clarifying the mind and liberating the body from diseases. It is a blend of physical, mental and spiritual endurance. Foreigners value the emergence of yoga and try to learn even the intricacies of it passionately. Foreigners in Mysore have realized that Yoga and meditation completes an individual and fulfills endless desires. Wellness centers offer cure for obesity, cervical spondylosis and slip disc. They also offer full body massage with herbal oil. There is lots of Spa in Mysore. You can find plenty of Ayurveda ashrams who adopt an ancient system of curing diseases.

Safety for Women Tourists, an Issue: Unfortunately, like other parts of India, female foreigners are not safe in Mysore. They are targeted even in broad daylight. Repeated molestation incidents have been reported in Mysore. Although Police is constantly patrolling and keeping a check, but the situation hasn’t improved. Foreigners in Mysore are advised to stay alert and report to the police immediately if untoward incidents take place.

Such reasons attract foreigners in Mysore. They visit Mysore every year and revitalize themselves. NRIs in Mysore have also built their bungalows and keep visiting Mysore on and off.