Malls are a kind of place where no one refuses to go. Whether it is women, men or kids. Women love to go there for their shopping endeavors, men need to accompany them and kids simply love the magnitude and the grand scale on which malls are built and enjoy that atmosphere. Such is the aroma that is exuded by a mall. The city of Mysore also has its fair share of malls and the most prominent among them is the Garuda Mall which is located in Ashoka Nagar. 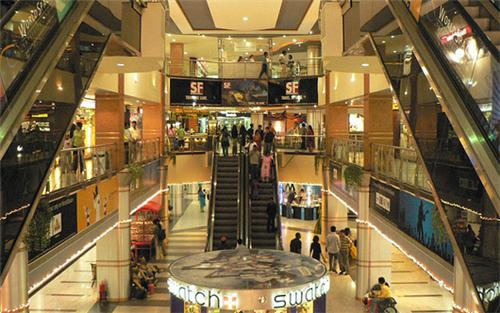 The Garuda Mall is known to be one of the biggest malls throughout the entire Southern part of India. Spread over 75,000 Square Meters, which includes over 26,000 square meters of shopping and entertainment space, the mall, consists of five stories and more than 120 stores. The stores are of several renowned national and international brands. There are plenty of entertainment options as well in the form of INOX Multiplex which has five screens, 1,150 seats and also activity centers for children.

Shops in the Mall

There are various places for shopping in the Garuda Mall, which include items for art and photography, children, footwear, books and stationary, electronics, health and beauty products as well as sports goods and miscellaneous items. The brands in this section range from Crossword, shoppers stop, Westside, Archie’s, Planet M, as well as Puma and Nike.

Restaurants in the Mall

There are also plenty of options for visitors to dine in the Garuda Mall. There are dining options in five exclusive restaurants serving Oriental, Continental, Mediterranean and Frontier cuisines. There is the world renowned Kobe’s Sizzlers on the fifth floor along with Baskin Robbins, Café Coffee Day (CCD), as well as Pubs like Bull and Bush and Indie which are located on the Fourth Floor. There is also a food court in the mall on the fifth floor which includes brands like Just Bake, Amrithsari Express, Shiv Sagar as well as Subway.

Entertainment in the Mall

There are also plenty of entertainment options in the Garuda Mall. There is an INOX theater which has five screens and a seating capacity of over 1,100 people. There also is a game zone called Amoeba which has many activities and games for kids. There is also a scary house, as well as Mirror Maze which leads you into a world of mirrors and a 4D theater known as Funmax.

Garuda Mall campus was initially built as the city's biggest parking place to avoid congestion on the nearby main roads. Garuda Mall provides you with a large number of parking slots for your 2 wheelers or 4 wheelers. There are various features of the car parking slot which include an automatic ticket vending machine, 24 hour co ordinate staff in the parking lot, 11 floors and slots for over 1050 cars to be parked, and CCTVs in order to ensure the safety of your parked vehicles.

Events in the Mall

Besides all this, there are also various events that are regularly held at the mall premises. The most prominent among them was the singing event known as ‘Voice of Bangalore’ that was held at the mall. The mall also offers three different kinds of leasing like the Short Term Leasing, Permanent Leasing and Specialty Leasing. The details of the same can be taken from the mall administration.

Location: The mall is located in the extremely famous and busy Ashoka Nagar area of Mysore and remains open from 11 AM to 9 PM on weekdays and from 10:30 AM to 10:30 PM on weekends.

The Garuda Mall is one experience to endeavor. The expectations you would build up for the same will surely not let you down on any count!