The second largest city in Karnataka, Mysore is one of the most visited tourist destinations in South India. Known as the “sandalwood and the City of Palaces of India” the city of Mysore presents a host of several breathtaking and prolific tourist attractions that can be visited and loved by the tourists during their vacation in Karnataka. Mysore, the cultural heritage of Karnataka is the home of the wonderful and world popular ancient temples, waterfalls, magnificent palaces, historical monuments, hill stations, sight-seeing garden, rivers, sunny beaches, museums and modern amusement parks in India. Tourists from within the country and outside come here round the year to explore the wonders of this splendid city. 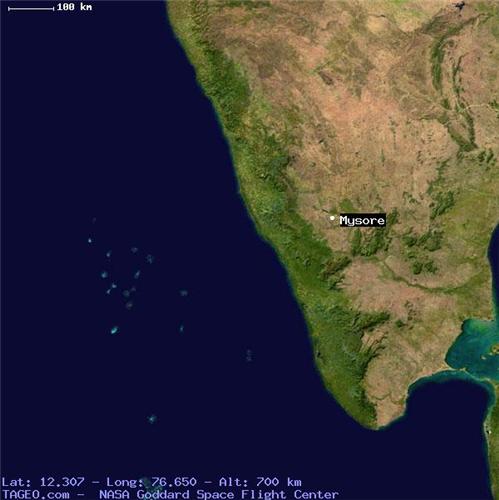 Mysore is also synonymous as the cultural capital of Karnataka. According to Hindu mythology, the city is ruled by a demon named Mahishasura who was killed by Goddess Chamundeswari.
Mysore was known as Puragere till the 15th century was ruled by several well-known warriors. Wodeyar I, Tipu Sultan and Hyder Ali were few distinguished rulers of Mysore. Apart from the hub of art, culture, wonderful natural and tourist attractions, the city is also recognized for its excellent education system, technology, Business Corporation and small industries.

As for the geography of Mysore, this prolific city is located at 12.30°N 76.65°E and has an average altitude of 2,526 feet from the sea level.  With the spread across the area of 128.42 km2, the city is located between the two famous rivers: the Kabini River that lies to the south and the Kaveri River that flows through the north of the city. The city is gifted with several wonderful lakes, waterfalls, Rocky Mountains and other sight-seeing natural beauties.  Mysore is located in the safe seismic zone and easily accessible by bus and train route.

Mysore has a semi-arid climate. Summer is the main season in Mysore from March and June.  The monsoon usually arrives in Mysore in July and from December a mild cold air start blowing that implies that winter comes in this wonderful city. The weather condition of this wonderful city can be can be described as a tropical monsoon type which is the result of the interplay of the two opposing air-masses of the northeast and southwest monsoons. The highest temperature in the city varies between 30 to 38 °C. The city’s average rainfall is 31.7 in. In short, you can say that Mysore is endowed with salubrious and a delightful climate around the year.

Situated between the shore of the Kabini and Kaveri River, Mysore is endowed with several perennial and non-perennial river. The Cauvery which is the major system of the district crosses the Mysore plateau from northwest to east along with Laxmanathirtha, Kabini, Suvarnavathi.

The Cauvery rises at Talacauvery and enters into the district through K R Nagar Taluk. The river cover 18 percent of the land area of Karnataka state and 95 % of its surface flow are used for drainage and agriculture purposes before it enters into the Bay of Bengal.

The drinking water need of the residence of Mysore is fulfilled by the Kabini and Kaveri River. Mysore sometime faces water crisis in summer season and during the time of little rainfall.

Mode of Transportation in Mysore

Mysore is beautifully interlinked with other areas of the State.  It is easily accessible by road, rail and air.  Mysore is connected with National highway NH-12, which reduces the distance from two states including Tamilnadu and Kerela. One can also use state highway 17, 33 and 88 to come in Mysore.

Mysore is visited by the tourist within the country and outside round the year. Mysore is recognized as the city of sandalwood, city of palaces and city of cultural heritage of Karnataka. There are several tourist attractions in Mysore. Some of the most popular are:


Facts and Figures About Mysore