Bylakuppe is a Tibetitan Refugee resettlement of “Dickyi Larsoe” and “Lugsum Samdupling” established in 1961 and the latter being established in 1969. Bylakuppe is in the western side of Mysore and Kushalnagar is the nearest town to Bylakuppe in Karnataka. The Golden Temple Mysore is located at Bylakuppe and it serves as a home for many Tibetans who live in exile. The temple also serves as an important center for Tibetan Buddhism in India. The Tibetan refugees in Bylakuppe make up a population of around 10,000. The entire settlement consists of agricultural and small camps located very close to each other including several nunneries, temples and monasteries belonging to the traditions of the Tibetan Buddhists. The most important monastery in this settlement is Sera which serves as an education monastic. There are other small monasteries such as Namdroling and Tashilunpo. However, the wonderful Golden Temple Mysore serves as the most important tourist spot in Bylakuppe. 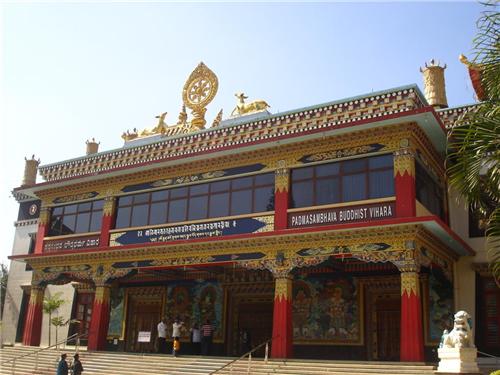 As Golden Temple Mysore is one of the major attractions at Bylakuppe, the temple is thronged with visitors all throughout the year and specially during the festivities. One who walks inside the temple feels like walking into a completely new and different world. Golden temple is a peaceful place and it takes people away from the noisy streets found in southern India.


Entrance of the Temple

The entrance of the temple possesses two large doors in red that have been embossed with complex murals and gold carvings.


Statues in the Temple 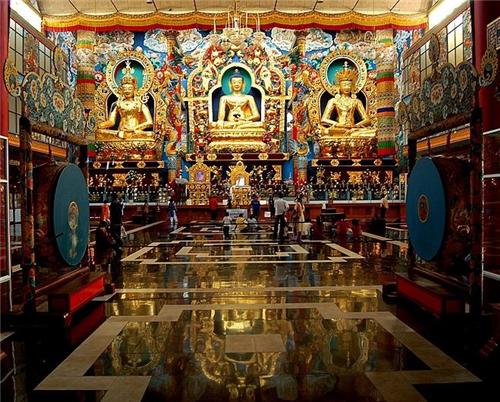 The temple consists of three Buddha statues that have been painted gold and they seem to be very beautiful indeed. The statues are 40 feet each and they are named Buddha, Amitayus and Padmasambhava. These statues are placed above the altar and they seem like looking down at the visitors. There are two thrones that accompany the statues.

Colorful paintings of demons and Gods from the mythology of Tibetan Buddhist adorn the walls of the temple. Incense, candles and flowers adorn the altar while small birds nesting in the statues are found flying happily in and around the Golden Temple Mysore. There are gongs located in the corners of the temple.


Premises of the Temple

The Golden Temple of Mysore is a place that is very calm and peaceful and at the same time it offers a majestic sight to its visitors. The temple is surrounded by landscaped parks on all sides. During festivals, an open stage is created of the main courtyard where masked dancers in colorful costumes twirl to the music produced by ceremonial trumpets that are quite massive and even gongs. Tourists are always welcomed to pay a visit to the temple and the monasteries found in Bylakuppe. Photography is permissible within the temple premises making it advantageous for the visitors to take some memorable snaps of this beautiful temple. There are a lot of stores available around the temple area that deal in the sale of Tibetan handicrafts, souvenirs, incense and jewellery. The temple also consists of several monasteries that serve as the best places that are used by the people for higher education. There are monks in the monasteries who teach science, mathematics and literature besides Buddhism.

The most famous monasteries located within the temple premises are as follows:
Sera Je Monastery: it is the Sera Je Monastery that has done a commendable job in the field of keeping the culture of Tibetan Buddhist alive in the town of Bylakuppe. The monastery is modeled and designed in close similarity with the original Sera University located in Tibet. Sera is related to the Yellow-Hat Gelugpa sect in Buddhism and is considered as the local hold of education. There are more than 5000 Buddhists who study at Sera Je Monastery in order to develop into monks.

Sakya Monastery: Sakya Monastery is not very famous and it is a maroon painted structure have two storey located opposite the road when one enters Bylakuppe.

Golden Temple Mysore located at Bylakuppe is an important place because it serves as a home to thousands of Tibetan refugees who fled from Tibet and at present they are called Tibetan Buddhists. There are a lot of prayer flags found hanging on the trees of Bylakuppe making it appear like a small Tibet in south India. The place seems like a small part of Tibet, not only because of the prayer flags that are found hanging on the trees but also because of the fact that the place consists of rice fields and coconut trees. There are also many restaurants found around the place serving Tibetan delicacies like dumplings that are meat filled and momos.


A Home for Tibetans 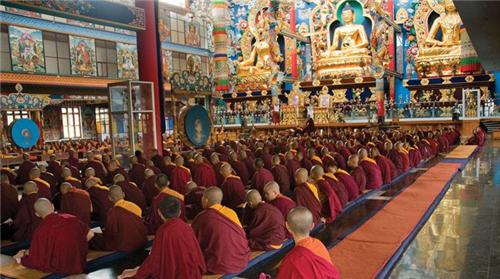 The exiled people from Tibet have made Bylakuppe their home and it is only because of this reason that the importance of the Golden Temple Mysore has grown manifolds. The Tibetans who live at this place are very devoted towards their culture and their tradition. It is only because of this reason that they have come up with the construction of the Golden Temple. The temple serves as the most auspicious and the most sacred place of the Tibetans in Bylakuppe. Not only a place of worship and prayers but the temple is also a medium of learning for the Buddhists located in Bylakuppe. There are several monasteries located within the temple. These monasteries sere as educational centers for the Buddhists who wish to become monks.

The temple is indeed a unique piece of art. The Golden Temple Mysore is a peaceful and calm place that makes a person feel like heaven and it is only because of this reason that people from every culture visit the temple.

Festivals Celebrated in the Temple

There are many festivals related to the Buddhist culture celebrated at the Golden Temple Mysore but the most important of them all have been enumerated below:

How to Reach There

Not only the Buddhists but there are different other religions and cultures that give special importance to the Golden Temple Mysore.