Mysore city is located 770 meters above the level of sea and it is at a distance of 140 kilometers from Bangalore. Mysore is also called the City of Palaces and it possesses a very quaint charm that is very good at enchanting the senses of the people who visit Mysore. Mysore is situated towards the south of Deccan Plateau and it is district within Karnataka that has played a very important role in contributing towards the historical culture of Karnataka. Mysore district is very popular throughout the world because of its tourist destinations that offer several attractions to the visitors ranging from royal splendor to exquisite temples, scenic spots and pilgrimage centers. It is the beauty and the landscape of the city that makes it very important for the Government of Karnataka to employ certain methods and to use certain effective steps that would help in conserving the landscape and the beauty of Mysore. The Government of Karnataka has handed over the responsibility of maintaining and governing the people and the other sections and government bodies of Mysore to the Deputy commissioner who is Incharge of every small activity that is carried out in Mysore. Therefore, the people assigned under the Deputy Commissioner also carry out their duties and their responsibilities in the best interest of the people of Mysore. 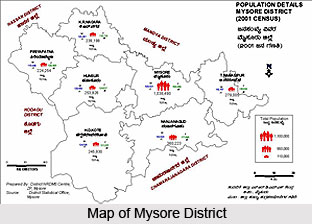 Magisterial matters and Law and Order: The very first function of the Deputy Commissioner summed under District Administration is public tranquility and safety. The district administration office of the Mysore district also looks into the maintenance of law and order in Mysore. The jails, petroleum bunks, cinemas, citizenship licenses, armed licenses and LPG cylinder storage all fall into the supervision of District Magistrate.

Matters of Municipal Administration: The Deputy Commissioner of Mysore also looks after the proper functioning and the supervision of local bodies in the urban areas of Mysore.

Emergency Relief: In circumstances like famines, floods, earthquakes, accidental fires and various other calamities that are natural, the entire responsibility is taken up by the Deputy Commissioner of Mysore who forms the Disaster Management Group.

Matters of Land Acquisition: Land acquisition for purposes of the public like construction of bridges, roads, industries and irrigation channels is approved by the Officer Incharge for Land Acquisition under the supervision of the Deputy Commissioner of Mysore.

Residuary Functions: There are many executive functions related to the Government that have not been defined precisely and there are no representatives appointed for the management of such functions by the Government. Therefore, the Deputy Commissioner of Mysore is also responsible of carrying out residuary matters. Such functions include Red Cross, Family Planning, Social Welfare Schemes on the district level, Minority Schemes and Department Works.

The assistant commissioner of Mysore is responsible for looking after the administration and the maintenance of the Talukas in Mysore and at the same time the Assistant Commissioner also looks after the Development Departments and the revenue Department.

The present Loksabha MP in Mysore is Adagooru Huchegowda Vishwanath who is sixty four years old and he has been elected from Mysore in the state of Karnataka. He is an active member of the Indian national Congress Party. He was born to Smt. Ramamma and Shri Huche Gowda and the name of his wife is Smt. Shantamma. He has three sons and a daughter.
Some facts about Adagooru Huchegowda Vishwanath:

The Government Bodies in Mysore including the Mp in Mysore and also the MLAs of the constituencies do a good job in maintaining and administering the district of Mysore.