Once upon a time, whole Karnataka was named as Mysore, considering many aspects like social, economic, political and others. Later, it came to known as Karnataka. However, the history of Mysore is like a vast Ocean, as you keep on researching, you will get innumerable information. 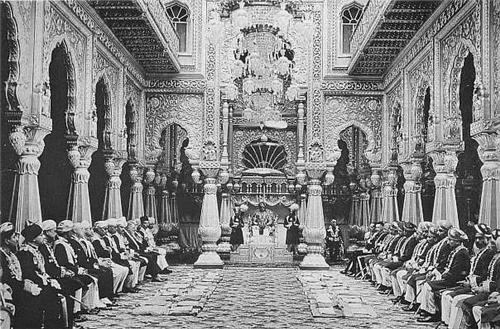 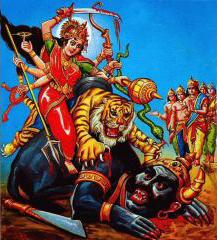 As per Devipurana, there was an Asura (Demon) called Mahisha (Mahisha + Asura), who became famous with the name Mahishasura. This Demon resided in the Mysore City, and caused many troubles to the people during long ago. Actually, there was no specific name for Mysore before; but, when the Demon – Mahishasura started ruling this city, people started to call the city as Mahishana Ooru (Place of Mahisha). After some days, they started calling it as Mahisha Ooru, which then became Mahishuru; later, Mysuru or Mysore. This is how Mysore got its name.

Mahishasura was destroyed by the Goddess Chamundeshwari (Chamundi), and hence, Mysore includes the Chamundeshwari Temple or Chamundi Betta (Mountain) in the City of Mysore; also, a statue of Mahishasura as well, due to which it has become a more popular Tourist Place.


Temples in Mysore of Mythological Relevance

The Goddess Chamundi or Chamundeshwari is said to be the avatar (incarnation) of Parvati Devi – wife of Lord Shiva. She is also known as “Shakti Devate” (Powerful Goddess), who fulfills the wishes of her devotees. Hence, people from all around the globe, visit this temple to have the blessings of the Goddess Chamundeshwari. This temple is a good example of Dravidian Architecture, which is situated on the Chamundi Betta (Chamundi Hills), whose height is about 3489 feet.

There are also statues of Mahishasura, Narashimhaswami, Nandi statues are also present on this Chamundi Hill. 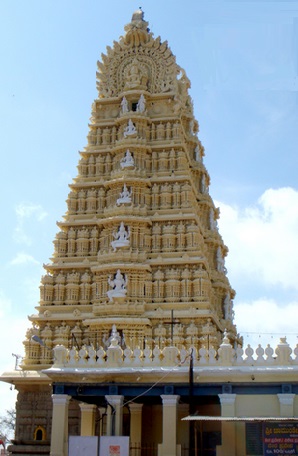 Apart from Chamundeshwari temple, there are also many temples which have their own stories or history. Such temples include – Lakshmiramana Swami Temple (a most ancient temple in the city); Prasanna Krishnaswamy Temple – a place where Lord Krishna Statue is kept, along with 40 other God and Goddess statues, which was established by Krishnaraja Wodeyar III; next comes Swethavarahaswamy Temple, installed by Krishnaraja Wodeyar III, and the Trineswaraswami Temple as well, which were launched inside the Mysore Fort, and are too near to the Mysore Palace, to have easy access to it by the members of Palace to offer their daily prayers.

Tourists can also visit Lakshmiramana Swami Temple, where statues of Lord Vishnu and Goddess Lakshmi are found; also, there is one more temple called Mahabaleshwar Temple, where a statue of Lord Shiva can be found.

Not just one or two, several rulers became the cause for the improvement of Mysore City. You might have read about the rulers – the Gangas (ruled in 10th Century), became the cause of the development of historical places, who also became the evidence of construction of Chamundi Hills, that was completed in 950 AD.

The Cholas ruled the Mysore City for more than a century, after the Gangas administration. Later, it was a turn of Chalukyas who followed the Cholas. Thereafter, Hoysalas went after Cholas from the rest of the Mysore, and these Hoysalas are well-known for the construction of beautiful temples, which are expanded on the Chamundi Hills.

As per the traditional accounts, the kingdom came into existence like a small state which is located in the modern city of Mysore. This kingdom was said to be founded by two brothers, Yaduraya, who is sometimes called as ‘Vijaya’, and another one is Krishnaraya. Some people say that their origins are found at Dwaraka, but other people say that, they are originated in Karnataka itself.

However, there goes a story that these people Yaduraya and Krishnaraya have come from the place Dwaraka, which was ruled by Lord Krishna. And during His rule, he founded “Yadhava Dynasty”, as Lord Krishna was from Yudu Vamsha (heritage).  There were two people from ‘Yadhava Dynasty’, who were noneother than Yaduraya (Vijaya), and Krishnaraya. These people started resting under Kodi Bhyraveswara Temple, which was found to be very near to Doddakere, from where people from other small areas of the Mysore city used to come in order to fetch water for both drinking and daily use.

At the dawn, these two brothers heard some gossips,  or discussion about the young Princess Devajammanni, who with her mother (Queen) fell into trouble after the death of the King Chamaraja, as the neighbouring Chief of Karugahalli as well as Maranayaka started demanding Kingdom and the Princess. Listening to this, these two people went to Jangama Odeya and protected the Chamaraja or Mysore Royal Family and Kingdom.

Later which, Yaduraya, who was also known as Vijaya, got married with the princess of the same dynasty, and she is called by name Chikkadevarasi, by whom Yaduraya got the title “Wodeyar” which means ‘Lord’. The first Wodeyar family started in the early 16th century kannada literature from the rule of the Vijayanagara king Achyuta Deva Raya, i.e., between the years1529–1542.

Before the arrival of these two people – Yaduraya and Krishnaraya, there were two more people called Hakka and Bukka who ruled in the year 1336 at Vijayanagar dynasty, as Vijayanagar was well-known due to its glory and prosperity. But, the most popular Yadhava ruler of Vijayanagar , was the Krishna Raya or Krishnadeva Raya.

And during the Wodeyar rule in 1399, wodeyar or Yadhavas established themselves in Mysore city, making Shrirangapattanam – a capital of Mysore. Later, Wodeyar’s Kingdom was said to be overruled by Hyder Ali and his son Tippu sultan. Thereafter, Mysore was handed over to the British Government, then after the independence in 1947, Mysore was handled by Karnataka Government.

Tipu Sultan's summer palace can be found at Srirangapatna. Story of Tipu is quite interesting – Tipu, 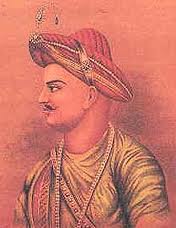 was named as the ‘Tiger of Mysore’, due to his braveness, and the strong personality, who learnt to fight by Muhammad Falak Ali. As Tipu was a Muslim ruler, he had great faith in Muslim God, so he used to offer prayers daily, and also gave more preference to the mosques and visit it often.

Also, Tipu constructed a beautiful church, which was the first church built in Mysore due to French Request. Not just one or two, there are many beautiful places, and works that are performed by Tipu Sultan during his rule. He even built the foundation for the most popular Krishna Raja Sagar (KRS) Dam. He had also taken the project of Lal Nagh, which was left incomplete by his father Hyder Ali.

Tipu even took responsibility of construction of roads and public buildings, as well as ports along the Kerala shoreline. His territories expanded all over North Bangalore which includes the Nandi Hills, including Kanivenarayanapura, and even Chickballapur.

Though both father and the son (Hyder Ali and Tipu Sultan), were independent rulers of Mysore, they maintained correspondence and had been loyal to the Mughal Emperor Shah Alam II. Due to which, both Hyder Ali and Tipu had direct contact and relations with the Mughal emperor.

Immediately after his retardness, Tipu Sultan made contact with the Mughal emperor – Nizam Ali Khan, who was the Nizam of Hyderabad. But, due to his false claims against Mysore, Tipu Sultan left Nizam and started to increase his contacts with other Muslim rulers of that period.

Later, during the year 1764, Peshwa Madhavrao II, defeated both Hyder Ali and Tipu Sultan and brought up the Maratha Empire and forced these people to accept them as the supreme leaders. In the year 1764, the Maratha Empire defeated again with Hyder Ali and Tipu Sultan, which made him to enter the city of Srirangapatna, the capital city of Mysore.

Hyder Ali accepted the authority of Madhavrao, who gave him the title of Nawab of Mysore. However Tipu Sultan wanted to escape from the treaty of Marathas and therefore tried to take some Maratha forts in southern India. This brought Tipu in direct conflict with the Marathas, who sent an army towards Mysore under leadership of General Nana Phadnavis.

The Marathas captured many forts related to Tipu Sultan in the Mysore region; whereas, Badami, as well as Kittur, and Gajendragad were taken into account in the year 1786. By encountering the victory in this war, the Maratha territory started to extend upto the Tungabhadra River. This made Tipu to build a very good relationship with the Marathas; where he sent his two agents to the Capital of Maratha in Pune, and when this deal was finalized, Marathas started to recover their territories that were occupied by the Mysore city.

After few years, the Nizam of Hyderabad had been given an Adoni, due to which Mysore was compelled to pay Rupees 48 lacks as a cost of war as well as, an annual tribute of Rupees 12 lacks to the Marathas, which in turn made Marathas to recognize and forever remember the rule of Tipu in the Mysore region.

Mysore was then considered as a formally tributary of the Mughal Empire, whose records claim a regular peshkash (tribute) to be paid by the city of Mysore.  Later, during the year 1720, the Mughal Empire was declined completely, and further complexities aroused from the Maratha residents leaving in Arcot and Sira who started to claim for tribute. But later, somehow, their claim has been declined and Mysore got freedom from such tributes. 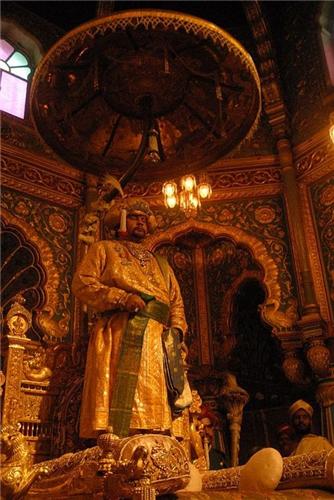 After Tippu’s death, five year old Krishnaraja Wodeyar III occupied his place, and the very next derived Chamaraja Wodeyar who ruled (1868 - 1895 AD). After his death in 1940, Jayachamaraja Wodeyar became the 25th ruler, and the kingdom was transformed in to a democratic state.  Though the ruling ended, Wodeyar family owns the royal property till today.