Mysore is a city in Karnataka which is very famous for various historical monuments that it possesses. Mysore has several palaces, gardens, temples, mosques, gurudwaras and churches in its possession and this is the reason why this city is given great significance. Mysore is known as the garden city not just because of its antiquity but also for the rare monuments that it possesses. The monuments in the city are found to possess scenic and artistic beauty that is unique and memorable. The climate of the place is simply pleasant and the entire city is located at a level that is 770 meters above the sea. There can be absolutely no doubt in the fact that Mysore is always flooded with tourists throughout the year. The tourists in Mysore add to the glory and the pageantry of the colorful festivals celebrated in Mysore. On the whole, Mysore has always been a city of inhabitants possessing a loving nature and communal harmony. The Mysore palace is one place that speaks about the architectural glory of Mysore. It is a spectacle possessing breathtaking beauty that has always remained a hot favorite among the tourists that visit Mysore for their holidays.

The churches in Mysore have always been popular. Saint Philomena’s Church which is located in Mysore ranks amongst the most famous churches in Mysore. Next in popularity is Infant Jesus Church Mysore which is a new church and the architecture and design of this church is an assimilation of Mysore and Mogul style. The church is a dedication to Infant Jesus from in Prague. The shrine of the Infant Jesus Church Mysore was inaugurated at Pushpashrama in R.S Naidu Nagara on 4th January amidst secular and sacred fervor. The consecration of the church was carried out by Rev.Fr. Joe Tauro the provincial Superior. Former IAS Officer and Minister of Tourism, Karnataka, Mr. J. Alexander was also present at the consecration ceremony. Among others who were present at the consecration were Bishop of Mysore, Rev. Dr. Thomas A. Vazhapilly, Bishop Emeritus of Mysore Rev. Dr. Joseph Roy and Bishop of Bellary, Dr. Joseph D’Silva. At the consecration ceremony of the church, Rev.Dr. Joseph Roy sanctified the shrine and the icon of Jesus in his Infancy with sacred water. The main halls at the church that is meant for prayers was inaugurated by the Bishop of Bellary, Dr. Joseph D’Silva while the holy mass was led by Rev.Dr. Thomas Vazhapilly.

The imposing mixture found in the architecture of Infant Jesus Church Mysore is also found in other important monuments in Mysore such as the Mysore palace and it serves as a real treat for the eyes of an artist. The church possesses domes that are five in number and they are topped with Kalasa and this is what mixes the two architectural styles. The assimilation of two great styles of architecture makes the church appear pleasing for the visitors and aesthetically beautiful too. The design of the windows, main entrance and even the pillars are in close contrast to those found at the Mysore palace. The church also consists of a life tree, glass windows made of stained glass depicting the cross and window grills that display Old Testament landmarks which serve as added features of the church. 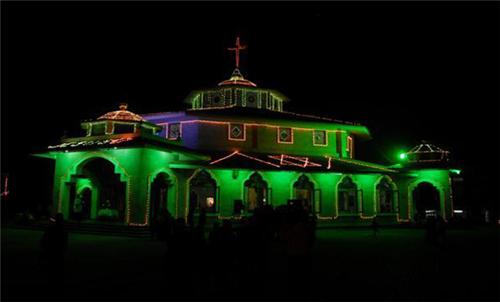 The Infant Jesus Church has been patterned on the structure of diamond that is shaped like an octagon and the entire structure has been built by the use of granite stones. The octagon, as is evident, consists of eight sides that represent the eight directions found in the entire world. There are three porticos in the church that are over elaborate and people from all over the world are welcomed to enter the porticos. There are sacred figures found to be carved on the huge doors that have been made of teakwood. The Holy Family is found insculpted at the church’s main door. The right hand side door consists of carvings of reformers of St.Teresa, St. John of the Cross and Carmel. The left hand side door consists of carvings that represent St. Edith Stein and St. Therese.

The church’s shrine area possesses stonework in three layers on its top. The stonework is three layers is significant of heaven, air and earth. The three-layered stonework serves as main dome of the church. Apart from this main dome, there are other four domes that are quite magnificent and they remind the people of the era of Mogul rulers in India. It was the era when Carmelites first entered India. The domes possess white tiles in the form of Kalasa on top which is considered to be a traditional symbol. There is a Cross that is chromium coated and is ten feet tall which crowns the church’s main dome. There is a dime glass in the main porch that automatically catches attention. There are four hands in various colors clasping each other found depicted at the porch. The four hands symbolize human brotherhood and its universality. They transcend the differences that lie between creeds, classes and cultures. There are Indo-Italian slabs made of marble found on the steps that lead to the sanctuary. The somber vault is provided support through eight giant pillars that have been decorated by the use of Indian capitals.

More about the Infant Jesus Church

The area that is found above the safe haven is decorated with a mural imitation of the Last Supper which is a masterpiece of Leonardo Da Vinci. Holy Spirit has been represented in the life size paintings that are found on the higher border of Infant Jesus Church and it is made of stained glass. The altar in the church consists of a globe that represents the entire world standing and this is found at the sanctuary entrance. It seems that the altar is also standing not only on the four pillars but on the globe as well. Infant is the message that is found in the design of the altar.

The church also consists of a life tree which is made of Eurocon tiles and bamboo finishing. The stonework which is made of three layers consists of fourteen windows along with grills in its last layer. The second stonework layer consists of windows that are shaped like diamonds and they contain Biblical scenes that are hand depicted. The top layer of the stonework is found bedecked with symbols of some religious beliefs followed by the people of Mysore. The symbols are a means to arouse solidarity and brotherhood in the minds of those who visit Infant Jesus Church Mysore and this will automatically help them in seeking salvation and truth. The artistic view and the terrain found close to the shrine is a means of imparting peace and serenity to the visitors. The greenery found around the church renders contemplative expectations and hopes to the hearts of individuals for a graceful and prosperous future.

Noven and mass is held on Saturdays 6.30 pm near the cave of Lady Mount Carmel. The Sunday mass for the lady is held at 8 am and in the English and Kannada language.

Spiritual service where the church remains open for adoration and prayer from 5.30 am to 8.30 pm on regular basis. There are priests available at the church for confessions, counseling and blessings every day.

Location and How to Reach Infant Jesus Church

It is very easy to reach Infant Jesus Church Mysore located at Pushpashrama by taking an auto from the railway station of Mysore or from the stand for buses. Private vehicles can also be used for getting to the church. The vehicles have to taken from ring road leading to R.S. Naidu Nagara and then Mysore-Bangalore Road which is very near to the toll gate.

Infant Jesus Church Mysore is next in importance to saint Philomena Church in Mysore and therefore it should be visited by people who plan their trip to Mysore.