The beautiful and historical city of Mysore apart from its architectural marvels also has some beautiful lakes to spend some time in the city. Well surrounded by the greenery the lakes are good picnic spots and also attracts migratory birds. The serene lakes surrounded by green plants are best space to take some rest after a busy week at work. The city has got 5 major lakes which are Karanji, Kukkarahalli, Lingabudi, Dalavai and Devanoor lakes. 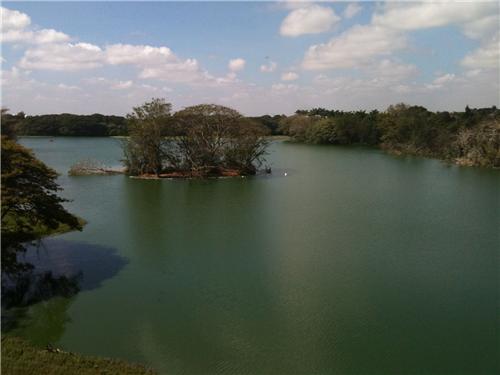 Few of these lakes are under restoration while the funds are being provided by the Karnataka government and Asian Development Bank.

Located in the Mysore University campus and middle of the city, the lake was developed by Mummadi Krishnaraja Wodeyar in 1864 to provide water for irrigation. Surrounded by thick green plants the lake is best spot for migratory birds. Best place to visit is especially during winter season when a lot of migratory birds flock this lake. Around 176 bird species travel from across the border during winter to roost. Some of the birds that visit this lake include Oriental Darters, Eurasian Spoonbills, Spot-billed Pelicans, Painted Storks, Black-crowned Night Herons and Openbill Storks. The lake was listed in the 38 Important Bird Areas (IBAs) listed by Birdlife International in Karnataka state. Asian Development Bank has provided funds in 2003-04 to restore the lake of its cleanliness and beauty. Karnataka Urban Infrastructure Development Corporation (KUIDFC) in association with University of Mysore has taken up the task of restoration.

Located at the foot of Chamundi hills the lake is home for almost 90 species of migratory and local birds. With hills in the backdrop and nice walkway the place can be a best romantic spot for young couples. Other entertainment aspects of the lake are Regional Museum of Natural History on the banks, coffee house, children park and boating. A small island in the lake has a butterfly park with nearly 45 species of butterflies. Special trees and plants were brought from outside and planted on this island for better breeding of butterflies.

Located just 8 kilometers away from the city, the lake also attracts many migratory birds and butterflies. Many water birds like Terek Sandpiper, Brown headed Gull, Thick-billed Green Pigeon, Red-necked Phalarope, Gull billed Tern, Pallas Grass hopper Warbler, Spotted Sandpiper, Green Sandpiper, and many other birds can be spotted here. Almost 210 species of birds including migratory and resident birds were spotted at this lake. An observation for about a decade has been done and found that some 107 species of butterflies are spotted at this lake. In 2003 a notification was released stating Lingambudhi Lake and its surroundings as protected forest area and would be owned by the state forest department.

Initially developed for irrigation and for drinking facility Dalavai Lake in the later years got polluted with sewage and other waste. The state government has stepped in to restore the beauty of the lake. Surrounded by thick green trees the lake attracts many people especially for a nice walk.

Devanoor Lake once used for irrigational purposes has become a garbage dump. The lake is under restoration by the funds provided by Asian Development Bank and under Jawaharlal Nehru National Urban Renewal Mission (JNURM).

It is worth to pay visits to these beautiful lakes as they provide with lovely backdrop and a perfect ambiance that relaxes and soothes one's mind, body and soul!