Mysore is a city in the south Indian state of Karnataka and previously it was the capital of the Wodeyar dynasty. It is the largest city in Karnataka and is assumed as the cultural capital of the state. Mysore also possesses the second position in the list of some of the cleanest cities in India. Mysore is a city of rich cultural heritage and it serves as a home to stately palaces, religious institutions and other beautiful monuments. It is only because of this reason that the city holds the record of drawing a large amount of tourists every year and the tourists are not only from India but from all over the world. Speaking of tourists, every tourist has a different temperament. There are tourists who like to holiday in a very simple manner because they also need to look into their budget while there are people who love holidaying in a grand and luxurious way. There are various hotels in Mysore that look forward towards providing services to such groups of tourists and corporate travelers. The hotels that serve such tourists are very famous for their blend of practicality and optimum luxury. The hotel that ranks first in the allotment of luxury services to its customers is Lalitha Mahal Palace in Mysore. 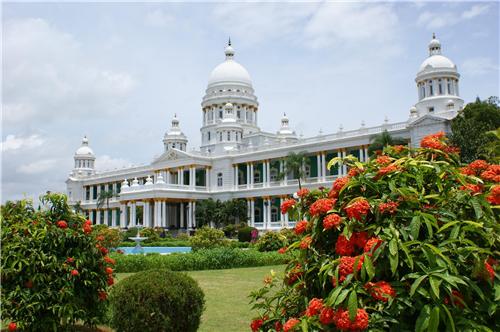 Lalitha Mahal Palace is majorly a hotel that is supposed to possess an important position in the list of India’s most lavish hotels. This is a palace hotel that offers an experience of living in a grand and princely manner in a Maharaja’s palace.

It is second largest in Mysore and its location is in the eastern side of the Mysore city, very near to the Chamundi Hills. The palace came into being on 18th November in the year 1921 as the residing place for the viceroy of India during that time. The palace was built procuring to the orders of Krishnaraja Wodeyar IV. Lalitha Mahal Palace is an imposing structure in the city of Mysore which has been built on a raised ground and the design of the palace is inspired from the design of St. Paul’s Cathedral in London. Pure white has been used as a color for painting the palace and it is because of the white color that the palace looks strikingly elegant. It was in the year 1974 that the palace was transformed into a heritage hotel and at present it operates as an elite hotel by the Ashok Group belonging to the Indian Tourism Development Corporation and it is a Government of India undertaking. However, it has to be noted that though the palace has been transformed into a hotel, the royal ambience of the Lalitha Mahal Palace is maintained in a good way.

Mysore is called the royal city and on a small hillock of this royal city stands the Lalitha Mahal Palace which is a white shimmering palace. The palace possesses a majestic two storey opus consisting of twin columns along with a projecting porch. On the top of this porch, lies a pedimented pavilion that is slightly recessed and also a spherical dome high on the top of the roof. The spherical dome is placed in drums that are colonnaded. Above the entrance hall that is centrally located, rests the central dome dominating the elevation. The entire palace is set in the middle of sprawling landscaped and terraced gardens.

Interior of the Palace

The interiors of the Lalitha Mahal Palace Mysore possess venation marble flooring that have been immaculately polished, stately banister staircase sweeping up to the upper floor, elaborate furniture made out of Rose wood and priceless carpets. An assimilation of all such features makes the interiors simply fascinating and awe inspiring.

Central Hall of the Palace

The decoration of the central hall is done by the use of life size portraits of the Royalties, decorative motifs found on the ceiling and the walls, dome made of Belgian glass, shutters made of carved wood, lithographs that portray the skirmishes of Tipu Sultan with the British, regal embellishments that possess myriad touches and wall panels that appear completely majestic and royal.

Accommodation in the Palace

The accommodation at the Lalitha Mahal Palace of Mysore is provided at stately suites that are 55 in number along with rooms that charge tariffs in US dollars. There are various packages offered by the palace that is meant to suit the requirements of the perceptive tourist.

The Duplex suites, Vicerine and the Viceroy Suites and rooms of the Lalitha Mahal Palace possess princely proportions. The suites and the rooms are quite airy and cool and at the same time they have high ceilings that makes for natural light within the suites and the rooms. The rooms also consists of period furniture, arms chairs that are velvet covered, four poster beds and Belgian mirrors that are gilt framed. The bathrooms are also very large and they are equipped with unique shanks that are considered to be a specialty of plumbing fixtures found in Scotland.

The Lalitha Mahal Palace also consists of a billiard room, tennis court, jogging track, swimming pool, health club and chess for the people who are enthusiastic in different kinds of sports. For its customers who are golf addicts, the palace has also coordinated with Shri Jayachamarajendra Wadiyar Golf Course hat is found locally.

The balcony consists of several things that can be considered to be very nostalgic. The balcony of the Lalitha Mahal Palace comprises of fragrant mogra and magnolia flowers decorated in bowls made of lacquered brass. The tables in the balcony have been burnished in silver consisting of portraits of the different kings of the Wodeyar dynasty in gold, their attire is ethnic and staffin and exotic green.

The ballroom of the palace has been converted into a Gourmet restaurant that is open for lunch, dinner and even for breakfast. The restaurant is quite appealing because of the Durbar ambiance that it possesses with Jharokhas and lace curtains. The “Mysore Silver Thali” is one of the most wanted dishes in the palace restaurant. The dish brings together South India’s spiced delights delicately and in the finest array of small bowls.

The authority in-charge of the Lalitha Mahal Palace are planning to set up a health club with Yoga and Ayurveda competencies for the customers. Renovation plans are also being made where the major area of focus will be doing away with the carpets and using wooden flooring or parquet tiles in place of carpets. By doing so, the palace is on the verge of assuring its guests a pleasant, comfortable and memorable stay at the hotel.

In the name of entertainment and recreation, there is nothing much to do in the Lalitha Mahal Palace Mysore. However, for the shopping enthusiasts there is huge scope to spend time shopping because the palace comprises of a shopping arcade. The main shops at the shopping arcade of the palace are:
There is also a library in the palace which is open to people who love to get some books and read them while they travel.

The Lalitha Mahal Palace celebrates every function and every festival with great embellishment and full enthusiasm. Proper festive appearance and look is given to the palace during occasions by means of the food offered at the restaurant, the decorations and the setup that is very successful in reflecting seasonal themes.

The Lalitha Mahal Palace Mysore is an embodiment of regal ambiance that reflects in the crystalled chandeliers and the floors made of Italian marble. The palace is a princely hotel at present and it is a great option used by the decision makers of the corporate world under glass domes that are high-xaulted. The palace provides the most modern comforts and luxuries to its corporate clients that come wrapped in royal ambiance. The palace also provides delectable cuisine in a silver platter to its guests through its restaurant services. The palace has been a host to several cherished events related to the corporate world. It is a place for recreational evenings, conferences and large banquets in beautifully landscaped gardens. The palace has always served as a great medium for seminars and conferences that possess a professional touch. All the modern business amenities are found available at the palace and this is what makes it a perfect venue for meetings and conferences. The guest at the hotel are lured to come back again because of the royal appeal of the palace that is timeless along with its personalized and prompt services.


There can be absolutely no doubt in the fact that the Lalitha Mahal Palace Mysore was a piece of beauty in the past when it served as a residence and it continues to be a unique piece of beauty in the present when it serves as a hotel. Thousands of tourists throng the palace during the peak seasons of the year in order to enjoy the royal feeling and ambiance at the hotel.