There can be absolutely no doubt in the fact that Mysore is a city that is historical and at the same time very social and appealing. The city is conservative, culturally as well as religiously. The Hindus and the Muslims of the city live in areas that are sharply defined and they hardly communicate and mix with each other. 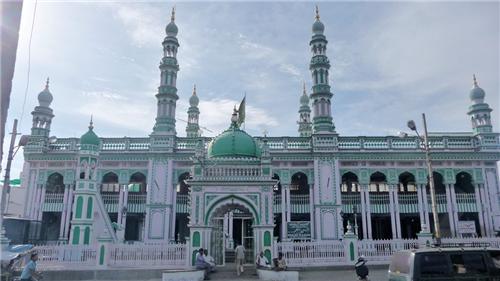 Historically, it has been found that the Muslims were dominant in Mysore because the entire city was under the reign of the Muslim rulers for a very long time. Ironically in the name of a Mosque in Mysore or a Masjid in Mysore there are a very few of them that can be named. Hyder Ali and his son Tipu Sultan were the rulers who laid the foundations of the Muslim influence in Mysore. Infact, Tipu Sultan is also known as the “Tiger of Mysore” because he was one Muslim ruler who ruled Mysore from 1782 to 1799 which is a very long period of time. Tipu Sultan was a very able ruler, a learned man, a soldier, religious follower and a poet. Mysore, at present, consists of several groups of Muslims possessing varied practices. Most of the Muslims in Mysore speak Urdu but there are Muslims who even speak Tamil, Labbai and Malayalam.

Survey of Masjid in Mysore

A survey has revealed the fact that there are very few mosques and Masjids in Mysore. It is due to the fact that not more than 18% Muslims in Mysore do their daily prayers five times a day. Less than half of the Muslims attend their Friday prayer which is considered as an obligation among the Muslims. There are a total of 120 mosques in Mysore where education in Urdu is granted to the Muslim children. One very famous Masjid in Mysore is the Jamia Masjid or the Masjid-e-Ala.

Jamia Masjid or Masjid-e-Ala in Mysore

The Jamia Masjid or Masjid-e-Ala is basically a mosque that is located very close to the Bangalore Gate of the Srirangapatna Fort. The Masjid was built by Tipu sultan, the Tiger of Mysore, in 1784. This Masjid was built by Tipu Sultan after he started reigning as the King of Mysore in 1782. The interiors and the exteriors of the mosque have been designed brilliantly with the use of unique sculpture and style. The interior of the mosque consists of an inscription mentioning the ninety-nine different names of Allah. The ceilings and the walls of the Juma Masjid have been decorated with Persian scriptures that have been intricately ornamented and finely calligraphed. The Masjid is a unique piece of art and it stands as the only example of Muslim influence in the city of Mysore. There are other such mosques found all over Mysore but they are of least importance because of the average style and design that they possess. It is only the Juma Masjid that is visited by tourists from all over the world because of the beautiful designs and the architecture that it possesses.

Masjid-E-Sohadaul Badar is situated at Shanthinagara North, Udayagiri, Mysore in Karnataka and it is also one of the historical monuments in the city built during the reign of the Muslim rulers in Mysore.

Apna Ghar Masjid is an important Masjid for the Muslims of Mysore located at Bannimantap A Layout, Shivaratureswara Nagar (near J.S.S College, Bannimantap), Mysore- 570015, Karnataka. The Masjid premise also includes a park that is very beautiful.

Madeena Masjid is found near Muhudevapura Main Road, Shanthinagara, Mysore in Karnataka and it is a splendid mosque that is able to draw a large number of tourists every year.

K R Mills Colony Masjid is located on Mysore-Bangalore Road (near Government Primary School), Mysore- 570003, Karnataka. This Masjid also holds an important position among the numerous Masjids found in Mysore. All the Masjids found in Mysore are considered to be scared among the Muslims of Mysore. These Masjids are looked after and taken care of by the Muslim authorities in Mysore and the Government of Karnataka also takes up necessary steps in regard to the renovation and the maintenance of the Masjids.

The Masjids in Mysore are worth visiting because they serve as places of religious and cultural value.