Heritage is something in which we take great pride in. Whether it is the heritage of our country, or any particular city, we are very proud to flaunt it. Somehow, this heritage gets showcased only during a certain period in the year and then people tend to forget about it until the same happens next year. That certain period during the year, the heritage gets showcased in the form of fairs or exhibitions. 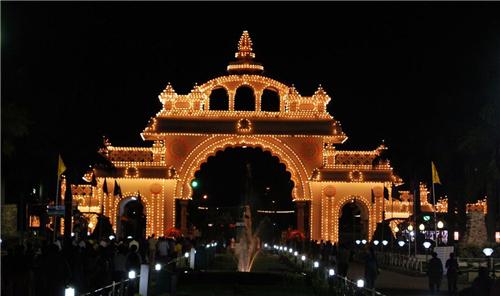 Concept Behind the Exhibition

When you travel to the hinterland of the country, you often come across huge gatherings which are known as ‘Melas’ which are a platform to provide entertainment to the people as well as for people across villages to showcase their talents in the form of various games and programmes. The same concept is known as fairs or exhibitions in the urban parts of the country. A similar fair is held in the city of Mysore during the festival of Dasara and carries forward from there on. The fair is known as the Mysore Dasara Exhibition.

Mysore is known for its Dasera celebrations. It is the most iconic festival which is celebrated there. The Dasara exhibition in Mysore is an annual exhibition that is held in the exhibition grounds opposite the Mysore Palace. The exhibition was started by the rule of Mysore HH Chamaraja Wodeyar X, in the year 1880, with the only intention to keep the people updated with the latest developments in the city of Mysore. The exhibition is now conceptualized, conducted and maintained by the Karnataka Exhibition Authority.

The exhibition begins during the festival of Dasara which is celebrated during the month of October, and lasts till the month of December. There are a number of stalls where you can find in a range of items like clothes, cosmetics, plastic goods, kitchenware and eatables which attract a significant number of people. A play area containing attractions like a Ferris wheel is also present to provide entertainment to the people. There are also stalls which are set up by various government agencies in order to showcase their achievements in the projects undertaken by them.

The ground serves as a perfect place for Dasara exhibition being a sprawling one. You can keep walking down your way to reach to the extreme end, the amusement section with giant wheels, toy trains etc. The stall by seri-culture department is both informative and practical. This is located before the amusement area mentioned above. The whole process of making silk, right from the live silkworms of various age and the tools used in the industry are on display. The courtyard also contains Mulberry plants, the leaf of which is the diet of the silkworm.


The Northern Side of the Ground

Towards the northern side is a “forest” complete with stuffed animals in a forest like scenario. This is a permanent section by the forest department. Large trees are grown to mimic a real forest. And there is a low lit path that zigzags through this section. This is set up by the state tourism department every year in order to showcase the forests of the state in terms of the tourism prospective. This is particularly enchanting if this spot is visited after sunset.


North-East Part of the Ground

The state archeological department too has a permanent pavilion towards the northeast part of the exhibition grounds. On the display are the archeological artifacts, mostly carvings of images and also a good deal of photographs of monuments.

Location of Exhibition Ground
The exhibition grounds are situated right below the Chamundi hills and on the bed of the large lake called Doddakere. The grounds are located right opposite to the main gate of the Mysore Palace.

Entry Fee
The fee for entering the exhibition is INR 10. There is also a parking lot opposite the grounds.

So get here and be a part of history and various aspects of nature!