Mysore Dasara Festival is the state festival of the Karnataka and it is known as Nadahabba. This festival is also called Navratri meaning nine nights. It is a festival that lasts for ten days and the tenth day of Dasara is known as Vijayadashmi which is the most propitious day during Dasara. Dasara usually takes place in September and October. Mythologically, Vijayadashmi marks the victory of superior over evil and it is considered as the day when Goddess Chamundeshwari slain Mahishasura, the bull headed demon. Mysore got its name from Mahishasura and the traditional wealth of the city is evident in its celebration of Dasara. The city celebrates Dasara in the form of an elaborate event and it also attracts a large number of audiences from all over the world including foreigners. The festival of Dasara completed its 400th anniversary in 2010. 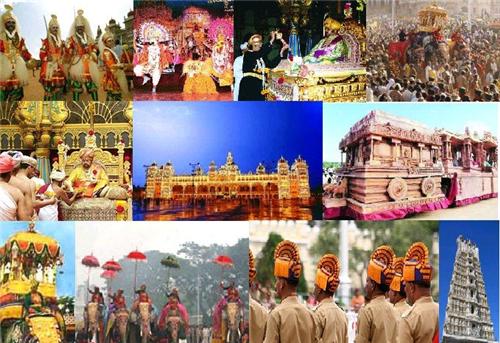 Dasara festivities in Mysore started in 15th century with Vijayanagara kings. After the decline of the kingdom of Vijanagara, Dasara festivities in Mysore were continued by the kings of the Wodeyar dynasty. Raja Wodeyar continued with Dasara festival in Srirangapatna in 1610. An illuminated Mysore Palace remains the main attraction of the people during Dasara and the palace remains illuminated during the ten days of the festival. During the reign of the Wodeyar King, Krishnaraja Wodeyar III in 1805, a special durbar began to be held during the festival and this durbar was held at the Mysore palace. The members of royal family, officials, the masses and even some special invitees remained in the attendance of the durbar. The tradition of arranging a durbar is followed even today by the present scion Srikantadatta Narasimharaja Wodeyar. On ninth day of the festival the sword from the royal family is worshipped which is followed by a procession that includes horses, camels and elephants.

The celebration of Mysore Dasara Festival is completely different from the ones celebrated in different other parts of the country. It is the rich heritage of Mysore that makes up for the royal celebration of Mysore Dasara Festival. This festival is celebrated as a mark of victory of Goddess Chamundeshwari over the evil demon Mahishasura which denotes the victory of holiness over wickedness. The festival is celebrated for ten days as a major part of Navratri. This is a famous festival in Mysore that is arranged in the exhibition grounds of the great Mysore Palace. The festival is also celebrated at Maharaja College Ground, at the Chamundi Hills and various other auditoriums found in the city. This is a famous occasion in the city when storms of devotees throng the city streets with festive mood and in attires that are very colorful.

The celebration of Mysore Dasara Festival includes nights that are full of merrymaking and dance amidst a city that is completely illuminated with bulbs. There are various types of exhibitions and food festivals arranged at different venues within the city so that the people can engage themselves in celebrations that are endless. Fairs are also arranged within the city where small outlets and handicraft stalls are found selling clothes, ornaments and various other interesting items for the people.

A traditional procession is arranged on the tenth day of the festival and this procession is known as Jumboo Savari. This is a tradition that starts from the great Mysore Palace and ends at Bannimantap. An elephant that is extravagantly decorated carries a very large golden idol of Goddess Chamundeshwari and thousands of devotees surround the idol.

Next a torch light march is carried out at Bannimantap grounds that is located in the outskirts of the city. At Bannimantap, worship of a tree called Banni tree takes place. According to legend, the Vijayanagara kings used to worship the Banni tree first before going out for any war. The tree is considered to be very important because it is supposed to be the tree under which the five brothers called Pandavas from the Mahabharata had hidden some of the arms that they carried before they embarked on leading a life under cover.

Gold cards are available for tourists who want to be a part of the Jumbo Savari or the torch light march and even eleven destinations in Mysore. There are a lot of hotels and ledges available for the tourists in Mysore. They make for a comfortable stay in the city as they provide all the basic amenities required by an individual.

Dasara Festival in Mysore is considered to be very sacred and important. The Dasara Festival in Mysore is celebrated with grandeur and pomp and by following the same traditions and customs that were laid by the kings and the rulers who ruled Mysore from time to time. In October, Mysore, the princely city of Karnataka is found decked up and completely prepared for the annual event celebration known as Mysore Dasara Festival dedicated to Goddess Durga. The celebration is a mammoth affair because it includes all the rituals and the customs that the people of Mysore have been practicing since the epic era. 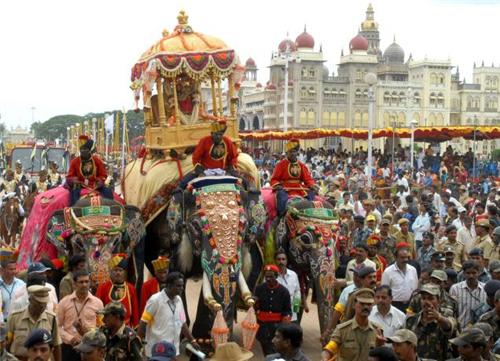 The procession that is carried out in Mysore during the Mysore Dasara Festival serves as main attraction of the city. It is an event during which Goddess Chamundeshwari’s idol is kept on a howdah made of gold and is passed through the streets of Mysore over an elephant that is extravagantly decorated.

This procession which is considered to be very traditional in Mysore is called Jumbo Savari. Before the procession is carried out on the city streets, invitees and royal couple of Mysore worship Goddess Chamundeshwari’s idol. Musical bands, decorated elephants, horses, camels, colorful tableaux and dancers form an important part of this procession that adds great fun and entertainment to the celebration of Mysore Dasara Festival. Nowadays, the procession also includes a team of the Indian Army that performs motorcycle stunts and even laser show. The procession also includes State organizations and the State police. The procession begins at the Mysore Palace and passing through the city streets it ends at Bannimantap where the event of worshipping the famous Banni tree takes place.
The procession holds a special position and a special significance for the locals. The people of Mysore strongly believe that it was on this day that Goddess Chamundeshwari slain Mahishasura the demon. A very interesting thing that can be learnt from this fact is that the city of Mysore is named after Mahishasura who is believed to have lived in a village in Mysore. The people of Mysore celebrate Mysore Dasara Festival with great passion and intensity. This procession serves as a symbol of the victory of holiness over wickedness.

Yuva Dasara is another event that is also arranged within the city during the celebration of Dasara Festival in Mysore. It is a program that constitutes of young students and is held at the college and university level. Cultural programs and fine arts include the main attractions of this event. If all the events that are organised throughout Mysore are summed up then it can be said that the fervor of Dasara celebrations in Mysore is immense. Various types of music and dance concerts arranged in the city also add to the fun and the fervor of celebrating Dasara Festival in Mysore.

Dasara and its Grand Commemoration at Mysore Fort 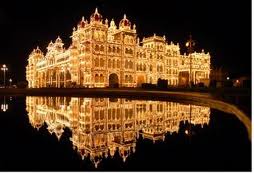 The old fort of the city is known as the Mysore Fort of immense historical significance. Mysore Fort serves as the place from where Tipu Sultan attacked the Britishers by the use of his legendary sword. This is another point that ads to the fact that Dasara is the festival that celebrates the victory of truth over sin. The grand commemoration of the festival of Dasara at the Mysore Fort is also hosted by the members of royal family in Mysore. Performances of leading artists are arranged on a set up of a stage at the grounds of the Mysore Palace. Various kinds of events like food festival, poets meet, folk dance, doll shows, film festivals, sports events and wrestling competitions are organized at the Mysore Fort. This is followed by a march or a procession from the palace to Bannimantap. During the Dasara Festival in Mysore the entire atmosphere of Mysore appears to be very energetic and passionate. More than 96,000 lights remain illuminated in Mysore during the Dasara Festival in Mysore.

The Dasara exhibition that is held at the Doddakere maidan, is also a very grand event that is attended 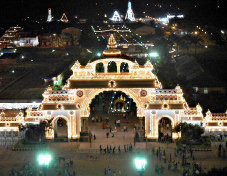 by thousands of people from all over India and also abroad. Dasara Festival in Mysore is considered to be very grand and an elaborate event that shows people of all races coming together and celebrating the event. This is a festival that breaks all the limitations of religions and faith and gets people together. Though there are many cultures and religions found in Mysore but during the celebration of Dasara in Mysore people off all faith come together and they try celebrating the festival in a very grand and elaborate manner. The specialty of the Dasara Festival in Mysore is that it continues for ten days during which people remain involved in making all the arrangements for the event.

People who want to be a part of the Dasara celebrations in Mysore should make their arrangements beforehand because during the festival it becomes very difficult to arrange for accommodation and transport in Mysore.