Athletics is basically a collection of sports that comprises running, jumping, walking and throwing. Some of the most acclaimed competitions that involve running are relay races, cross country running, race walking, road relays and marathons. Athletics does not require any expensive equipment which is why it is favored by many people. It is mostly played individually.  Athletes compete at district, city, state, national and international levels 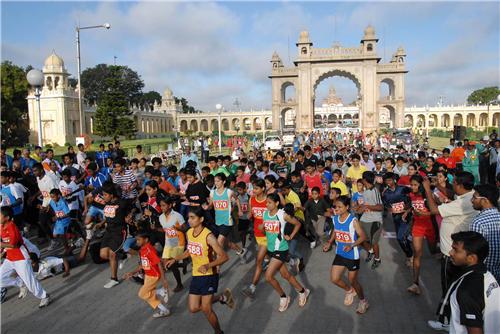 Mysore excels in the field of athletics. Several renowned athletes belong to the city of Mysore. The city has always contributed greatly to the state in athletics. Some of the world famous athletes of Mysore are Silver medalist, S. Somashekar, bronze medalist, Seetharam and many more.

The athletics competitions are divided into three primary categories.

The tournaments are held mostly in stadiums, set race courses on grass or woodlands and open roads or tracks made on roads. They are made in a way to ensure the safety of the athletes.

Athletics is promoted by the Mysore District Athletic Association which aims at conducting different meets of all ages. At all levels Mysore has made Karnataka and India proud.

A marathon is a long-distance event which focuses on running covering a distance of approximately fifty kilometers. The event is mostly conducted on road tracks. It was one of the events of the Olympic Games initially. The marathon is held all over the world annually but the distance varies. A marathon involves men, women, children and differently able. The basic idea of a marathon was initiated to host an event for people that aim at creating awareness about health and living conditions of people and different sections of the society.

The marathon is run in teams and group and people from all over the world participate in this athletic event. Mysore also conducts several marathons every year which invites a large number of people globally.

The Celebration Mysore Half Marathon & 10K was held in 2013 on 29th September by the organization called Life is Calling Sports.

The Kaveri Trail Marathon was held on 14th and 15th September 2013. The trail began from Ranganthittu Bird Sanctuary and finished at Young Island Resort in Srirangapatna.

The Namma Mysore Marathon was held on 29th September 2013. The event started from the Mysore Palace and ended at the same place. This was the Mysore Half Marathon.


Explore more about Sports in Mysore