Mysore lies in the southern part of India and it is city in Karnataka. like most of the states that lie in the southern part of India, the food found in Mysore is also rice based. Dosa of all kinds and idli form one of the integral parts of Mysore cuisine. The dosas and idlis available in Mysore are wholesome, delicious and simple. The all time famous and favorite of Mysore is dosa filled with potato and served with coconut chutney, onion chutney and Sambhar. There are different kinds of dosas found in Mysore namely semolina or rava dosa, masala dosa and set dosa. Of all the different varieties of dosas available in Mysore, the masala dosa from this place is very famous because of its taste and the blend of different ingredients. In order to have a detailed information about Mysore Masala Dosa it is important to have some idea about a dosa first. 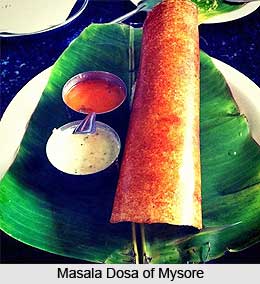 The Mysore Masala Dosa is made by stuffing the dosa with fillings of fried onions, potatoes and spices that are lightly cooked. The entire dosa is wrapped around a curry that is made from potato and onion. Some variants of Mysore Masala Dosa are:
The masala dosa that is served in Mysore consists of red chutney that is spread in the inside of the dosa and red chutney is made out of good amount of garlic.

Mysore Masala Dosa is a tasty dish that is mostly ordered by people who visit vegetarian restaurants in the southern part of India. This dish is very popular and is widely eaten in the southern states of India but it is equally relished in most of the northern states of India also. The name of the dish itself is fascinating which combines a flavor of red chutney and is filled with a lovely blend of onions and potatoes cooked gently along with some other condiments. Anyone gets completely satiated by the aroma of red chutney along with the tangy masala that nestles inside the dosa. Mysore Masala Dosa is considered to be enough for late lunch, breakfast and even dinner. The best thing about this dish is that there is no side dish required to accompany this type of dosa as there is the masala and the chutney that serve to satisfy the taste buds of an individual.


Mysore Masala Dosa is considered to be classic, comforting and absolutely additive. It is a special dosa found in Karnataka that owes its origin to the city of Mysore. One thing that is noteworthy about the restaurants in Mysore is that every restaurant serves its very own version of dosa. At the restaurants, the dosas are served with different accompaniments and even there are changes found in the stuffing of the dosas. The great change in the texture of the dosas is also found in restaurants that serve dosas in Mysore. The masala dosas in Mysore are crisp and thin possessing an exterior that is crisp and an interior that is spongy. The dosas ordered in Mysore come drizzled with butter or ghee and podi sprinkled. The dosas are served with sambhar, an array of chutneys that is quite colorful and potato masala. At some places the dosas are also served with green chutney and vegetable saagu. The best thing that can be done to finish off this delicious dish is by taking a cup of coffee along with it.

The method of preparing the Mysore Masala Dosa is quite easy and it has been enumerated below:

Dosa is usually found stiffed with vegetable fillings and sauces that makes for a very quick meal. Dosa is served with side items like wet chutney made out of coconut, Sambhar and dry chutney consisting of desiccated coconut and spice powders and even Indian pickles.

Dosa and the Nutrition Associated

Dosa is also known as Newari or Chatamari. It is a kind of a pancake or fermented crepe that is made from black lentils and rice batter. This dish is the staple food of most of the southern states in India like those of Tamil Nadu, Karnataka, Kerala and Andhra Pradesh. Dosa is also popular in several other countries such as Malaysia, Singapore and Sri Lanka. Dosa is common in the form of a breakfast in southern India and is also eaten as a street food in most of the states of India. The carbohydrate content of this dish is very rich and at the same time it also does not contain saturated fats and sugar. The main ingredients of this dish are lentils and rice and it is only because of this reason that this dish is rich in protein and is free from gluten. Fermentation process of this dish increases the vitamin C and vitamin D content of dosa. Nowadays, instant mixtures for the preparation of dosa are found available in the market but theses mixes are very low in their nutritional value.

Explore more about Food in Mysore