The moment you see people running helter skelter on a railway station, you can clearly understand that they are about to miss their train. The sound of the engine hooting then adds to their woes and they would run as fast as they would have ever run in their lives. But whatever be the case, the trains have become our man Friday for every travel that we wish to undertake. Before even thinking of flying by air, we would always expect that there is a train to our destination which would take us through various natural landscapes. 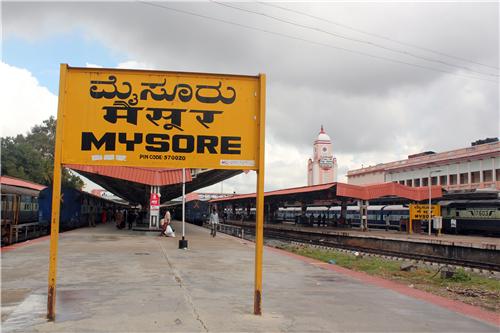 The southern part of India has seen a rapid rise in tourist footfalls and as a result the connectivity to the rest of the country has improved drastically. One of the major junctions on the South Western Railway Zone is the Mysore Railway Station, which is an important junction in the state of Karnataka. Previously, Mysore was connected to the state capital Bangalore through a meter gauge. However, after its conversion into a broad gauge, many trains that earlier terminated at Bangalore have now been extended to Mysore. The station has six platforms. It also won the most tourists – friendly station of the year award in the year 2011 – 12.

There are two different tracks, one coming in from Bangalore and the other one coming in from Hassan, which together intersect at Mysore. The track then divides into proceeding towards Nanjangud and Chamarajanagar. There is also a proposal to extend this route to Coimbatore which has however being put on hold as it passes through the dense forests of Sathyamangalam.


Amenities Provided in the Station

There are various amenities provided at the Mysore Railway station. One of the most important of them is the 24 hour free emergency medical care center. Aided by state of the art medical equipment, the center is taken care of by Vikram Hospitals. A chemist shop is also present at the station. A battery buggy or a golf cart is also provided by the railway station in order to transport the physically challenged and senior citizens to their respective coaches on their trains.

Other facilities available at the station are drinking water with reverse osmosis at similar places where the mobile chargers are available and there is also a multi – lingual railway announcing system which is an LED indicator indicating the arrival and departure of trains in English as well as Kannada. There are executive lounges, waiting rooms, ATM counters of various banks, as well as touch screen kiosks which give information regarding PNR statues, reservation availability and trains running in the
Mysore division.

There are several trains that leave for various destinations from Mysore Railway Station. They are;

Hotels in Mysore near Railway Station

Mysore has trains that connect to almost every part of the country in order to ease the difficulty for you travelers.  Mysore is a part of the south western railway and is a division in its own. The stations under Mysore division include Hassan Junction, Mysore New Goods Terminal, Nanjangud Town, Chalgeri, and Chitradurg.