An Indian woman’s wardrobe does not really complete with at least one piece of cloth which enhances the value of her wardrobe. Saree, the elegant piece of clothing makes an Indian woman more classic and more Indian. And when it comes to Saree how can that soft and delicate material be kept left behind which takes the six-yard of classical drape to a different height? Yes, we are talking about the Silk, the most ancient form of fibers known to the humans. The silk saree is one particular thing which is loved by all kind of women of all ages. And when discussing silk saree, no further discourse can be stretched ahead without taking a nice look into the Mysore Silk.

Have you ever been to Mysore and did not even get a closer look on those vibrant, butter-soft silky drapes? If Mysore is famous for the grandeur of the Mysore Palace, it is also synonymous to the magnificent Silk material popularly known as the Mysore Silk. These colourful, elegant pieces of wonder are uniquely produced in Mysore, the palace city of the state of Karnataka. 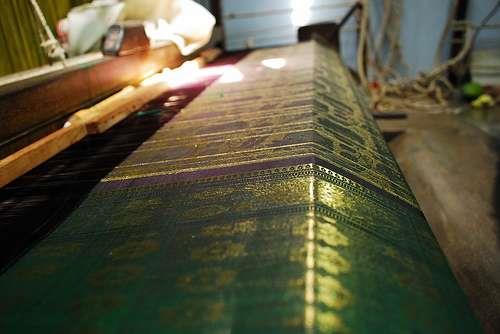 Silk is an essential part of the global culture and 97% of the total amount of raw silk produced in India each year is produced in five states of Karnataka, Andhra Pradesh, Jammu & Kashmir and West Bengal alone. Karnataka leads as the number one silk producing state in the country. The biggest franchise of the silk in Karnataka comes from the Mulberry Silk.  Mysore silk is a variation of Mulberry silk which is chiefly produced in the district of Mysore.

This product is manufactured solely by the Karnataka Silk Industries Corporation or KSIC and produced at the Mysore Silk Weaving Factory, the oldest silk manufacturing factory in India. Each year the state of Karnataka produces almost 14,000 metric tons of silk materials among which the main silk variation is Mulberry silk itself. The historical backdrop of the silk industry of Mysore dates back in the era of Tipu Sultan, who took a keen interest to make the state’s silk industries grow large after the first silk cocoons were imported in Mysore in 1785.

But after a while the imported silk materials start giving the native products a big time competition and the market almost fell down. But during the second half of the 20th century the sericulture and the silk industries in South Indian soil were perked up all again and again Mysore became the central hub of sericulture and the largest producer of the Silk in India.

As we mentioned before, the sole right of manufacturing the Mysore Silk remains under the Mysore Silk Weaving Factory which was established by the then king of Mysore in 1912. At first this unit of fabric manufacturing was built to fulfill the needs of the Royal family and the armed forces. In 1980, this factory was owned by the KSIC.

The factory started its journey to the weaving world with only ten looms and now the factory has 44 looms for producing the finest silk materials in the country. From the beginning, the Mysore Silk Weaving Factory has been using pure gold zari and the pure Silk reeled from the cocoon. The unit does not only produce the vibrant Sarees, scores of men’s apparel and other dress materials also come from this mill which has tremendous demand over the whole India. 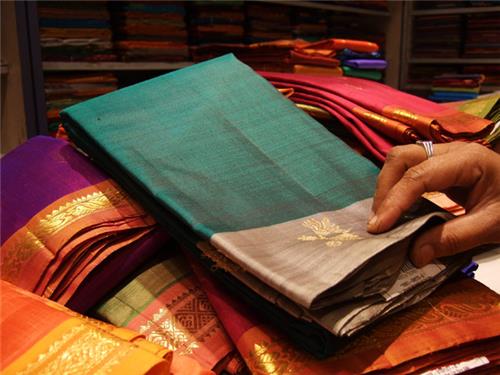 Quality wise can be placed right after the original China Silk, Mysore silk was created by hybridizing several silk worm varieties considering the geographical conditions of Mysore. A little different from the other silk variation, Mysore silk weighs lighter, more lustrous and minimalistic in design which makes it more popular in both young and older customer.

Albeit expensive, Mysore Silk has its unique exquisite value for which it has been retaining the high demand for years both in India and the overseas. Recently, keeping with the modern trends KSIC has launched an all new ‘Fusion Label’ in which they use nano-technology to stop the counterfeiters and at the same time the makers are working on making some fusion work enabling this alluring six-yards fetch more admirer all over the world.