Mysore city, popularly known as the cultural capital of the state of Karnataka, is situated 770 m above the sea level. Mysore is also known as the city of Palaces and it is situated 140 km away from the city of Bangalore. The entire city of Mysore is an undulating tableland and several parts of it are covered by granite outcrops. The popular places to visit in Mysore are Mysore Palace, Kukkarahali Lake, Krishna Raja Sagara, Jaganmohan Art Gallery, Lalitha Mahal, Brindavan Gardens, Datta Peetham, Mysore Zoo, Chamundi Hills, Folk Lore museum and others. Also, there are many temples in Mysore. 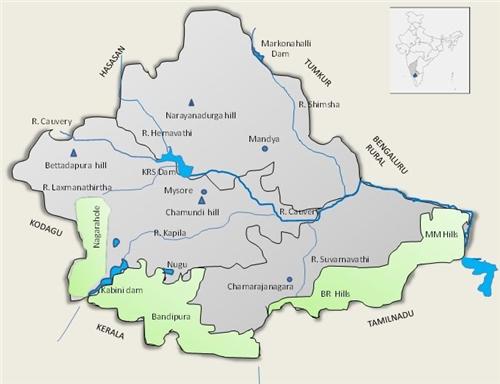 The city of Mysore is located between 12 18’ 26” North Latitude and 76 38’ 59” East Longitude. The weather is pleasant always, no matter when you visit this city. Mysore is the second largest city in the state of Karnataka and the first cleanest city in the state. Mainly, plateau and hilly lands are found in Mysore. The total land area of Mysore city is 6854 sq. km. As per the statistics, Mysore is the sixth largest city in Karnataka in terms of land area.

Tropical monsoon type climate exists in the city of Mysore. Summers in the Mysore city are languorously warm while the winters in the place are bracingly cool. The city has a delightful weather all through the year. Four seasons are applicable- Cold weather, hot weather, southwest monsoon and northeast monsoon.

Lakes and Rivers in Mysore

There are three major lakes in Mysore city – Kukkarahalli Lake, Lingambudhi Lake and Karanji Lake. Karanji Lake is situated below Chamundi Hills. This lake is about 90 acres vast and has boating facility as well. Another lake, the Kukkarahalli Lake is situated in the Mysore University Campus. Several migratory bird species arrive here during winters. Lingambudhi Lake is situated in Srirampura and the lush green part situated beside this lake adds to the beauty of the lake. The River Kaveri flows through the north-western and the eastern parts of the city.

Mysore has a varied geography and its cultural importance has made it the cultural capital of Karnataka. This place has a pleasant weather all through the year, thus inviting tourists from all over the world.