Saligrama is a town in the Udipi district in Karnataka. It is situated between Udupi and Kundapura. Saligrama is 81 km from Mangalore and 20 km from Udipi. The name Saligrama is derived from the sacred stone worshiped by a sect of Hindus known as Vaishnavas Smarthas. Saligrama is an iconic symbol of Lord Vishnu. Most of the Saligrama inhabitants are Kota Brahmins. The official language of Saligrama is Kannada. Konkani and Tulu are also spoken here. Kota Brahmins worship Guru Narasimha as their family holy being (Kuldevta) Padma Purana states that Narada Maharshi positioned the idol of Guru Narasimha at this place. Hanuman temples and Guru Narasimha temples are located in Saligrama are said to be over a thousand years old. The Sri Vishnu Murthy temple is also 800 years old and large number of devotees from India and abroad visits the temple. 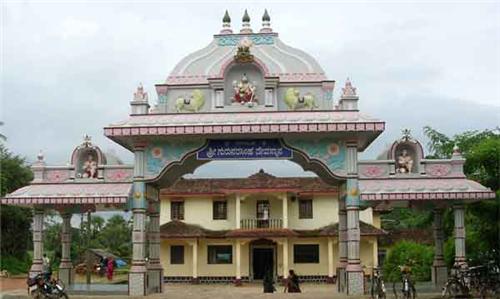 On 16th and 17th January every year car festival is held in Saligram and it is attended by thousands of people from all over the state. Saligrama is in the coastal area of Arabian Sea. Padukere beach is very famous in Udipi, it is around 3 km west of Saligram, and it is full of natural scenic beauty. There is a famous Sanskrit school located exactly adjoining to the Guru Narasimha temple. K.Shivrama Karantha, who hails from this village, is a Jnanapeetha and a Padmabhushna awardee. There is a famous place called 'Divine Park' located in Saligrama. The Divine Park has a temple wholly dedicated to Swami Vivekananda and Ramkrishna Paramhansa which is a symbol of Universal Religion and is a depiction of integrity and peace.

Udipi district has many Holy places and Holy Ponds (Tirtha Sarovar). Narada Muni visited this place and bathed in many Holy Ponds. Narad Muni heard a Divya Vani from an unknown source to install Lord Narasimha’s idol in Saligrama. Guru Narasimha idol is very fascinating; it is holding chakra in the right hand and shankha in the left hand. Devotees visit Guru Narasimha Temple at Saligrama worship Saligrama idol to achieve their desires. Kota Brahmins worship Guru Narasimha as their family diety. They don’t believe in human guru or religious heads. So, worship Lord Narasimha as their diety and Guru.There is believe that those take a holy dip in shankha and chakra teertha will get rid of all the diseases and fear of enemies. They will also attain prosperity.

Sudheendra Aithal runs animal rescue center Close to Guru Nrasimha Temple. He has rescued several animals and keeping at his place. Those who visit the Holy temple also visit his house to see animals being treated with utmost care .Also there are so many sightseeing Hill stations around Saligrama like Chandragiri Hills, Matanga Hill, and Yana Hills etc. Saligrama is full of greenery.

How to Reach Saligrama

The closest tourism destination is Melukote, Dubare, Channarayapatna and Saravanabelagola. The nearest railway station from Saligrama is Mandya (MYA) which is around 8 kilometers away. Nearest airport is Bangaluru which is at a distance of 160 kilometers. Direct bus services to Saligram are available from Bangluru and Mumbai. Busses which go to Kundapura pass by Saligrama. So you can catch bus from Bangluru which goes towards Kundapura. Saligram is considered as high-altitude city lying at an altitude of 2598 m