Srirangapatna is a small town located in the Mandya district of Karnataka in India. It is very near to Mysore and the town has a great religious, historic and cultural importance. The town has got its name from the famous Ranganathaswamy temple which has full control over the won and in a way the temple dominates Srirangapatna.

Srirangapatna - The Town of Religious Importance

It is only because of this temple that Srirangapatna has emerged as one of the most significant Vaishnavite centers in the world. The town is an important pilgrimage in the southern part of India. The Ranganathaswamy temple contributes to the religious significance of Srirangapatna. The rulers of the Ganga dynasty built the Ranganathaswamy temple in the 9th century. Three centuries later, the structure of the temple was improved and strengthened architecturally. Therefore, the temple architecture is an assimilation of Vijayanagara and Hoysala styles.

Traditionally, it is said that the islands that form in River Kaveri are sacred to Sri Ranganathaswamy and therefore large temples were built in dedication to the deity on the three largest islands found in the river. The towns that constitute the main pilgrimages that have been dedicated to Sri Ranganathaswamy are:
The existence of River Kaveri is itself considered to be very sanctifying and auspicious. The Paschima Vaahini division of River Kaveri located at Srirangapatna is held to be sacred and it is only because of this reason that thousands of pious people come from very far off places for the immersion of the ashes of the ones who have departed. These people also perform obsequies for their ancestors in the water of the river.

Srirangapatna has got tremendous religious significance and is blessed with a number of temples visited by lot many tourists every year. 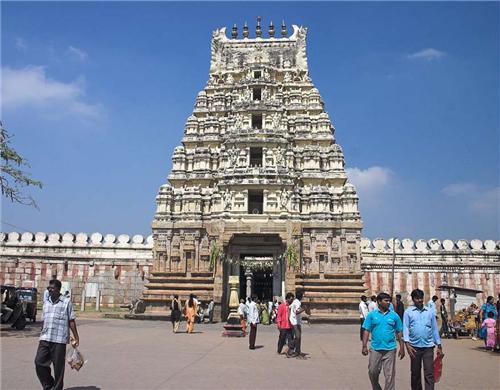 Sri Ranganathaswamy temple located in Srirangapatna is also known as Srirangapatna Temple and it is dedicated to God Ranganatha who is considered to be one form of Lord Vishnu and also belongs to the Pancharanga Kshetrams. Srirangapatna town derives its name from this temple and the temple is very scared and auspicious for the Hindus in Mysore.

The presiding deity at Srirangapatna temple or Sri Ranganathaswamy temple is Lord Ranganathaswamy who is considered to be an embodiment of great Lord Vishnu. Srirangapatna Temple is a very important division of the Pancha Kshetram and is very scared for the people and the Srirangapatna town. An astonishing fact about the temple is, Hyder Ali and Tipu Sultan were the devotees of Lord Ranganatha. The entire temple is decorated with hundreds and thousands of lamps during Makar Sankranti festival which makes the temple appear magnificent.

Srirangapatna Temple is popularly known as Sri Ranganathaswamy temple located at Srirangapatna Mysore. This temple came into existence during 894 AD and the hands behind the construction of this temple were those of Tirumalaiya, the Ganga King. The patrons of this temple were many dynasties of rulers and kings. The kinds and the rulers of different dynasties that ruled Mysore from time to time looked after the upkeep of the temple. The most prominent patrons of Srirangapatna Temple were the Hoysalas, Hyder Ali, the Wodeyars, Tipu Sultan, and the Vijayanagara Kings of Mysore. The temple is an important part of Pancha Kshetrams which is a cluster of five temples devoted to Lord Ranganathaswamy. Legend says if a person is able get the sight of five temples on one single day, he or she attains salvation.

The architecture of the temple is very famous all over the world because it is an assimilation of the architectural style of the Vijayanagara and the Hoysala empires. The main foyer of the temple is engraved beautifully with Lord Vishnu’s twenty four forms. The entrance of the temple also possesses a figurine of majestic and well ornamented elephants guarding the entrance of the temple. As one enters the line up to get inside the temple, one will find two masterpieces that cannot be missed. The masterpieces are Nagashesah and Garudavahana that are gold plated. The deity that presides at the temple that is Lord Ranganatha is found sleeping on the seven headed serpent called Adi Sheshan. The Goddess of the temple is Ranganayaki. The descriptions of Sage Gautama and River Cauvery are also found enshrined in the temple. There are quite a few other deities found in the temple including Lord Narasimha, Panchamukha Anjenaya and Lord Venketeshwara.

Other Tourist Attractions at Srirangapatna Mysore

Apart from Sri Ranganathaswamy temple, there is another great temple that succeeds in drawing a large number of people at Srirangapatna. The name of the temple is Nimishamba temple which is famous among devotees because of the belief that people get great relief from their pain position by visiting this temple. Lord Nimishamba is the deity presiding at this temple and she is a form of Goddess Parvati.

Ranganathitu, a bird sanctuary located at Srirangapatna Mysore is also very famous as a tourist spot among the people. The entire sanctuary is made of six islets and it has the provision for boat riding. Boat riding across the islets has been provided to the visitors to make it easy for them to view the winged population of the sanctuary. During December, migratory birds appear at the islets to leave their eggs and stay at the sanctuary until the eggs hatch and the little ones are prepared to flu back within August.

Srirangapatna served as the capital town of Tipu Sultan and Hyder Ali. The fort ruins of these rulers subsequent to the war that took place between them and the Britishers are still found at Srirangapatna. People can always visit these ruins. Lal Mahal is yet another tourist destination in Srirangapatna Mysore. Lal Mahal is a palace of yesteryears belonging to Tipu Sultan. There is a dungeon named Colonel Bailey Dungeon which is very famous because it was the place where Tipu Sultan imprisoned many British officers. Tipu Sultan also built a splendid mosque known as Jama Masjid which is very sacred for the Muslims of Mysore. There are 200 steps in the Masjid that people need to climb in order to get to the Minarets for a marvelous sight of the environment.

An island named Daria Daulat Bagh at Srirangapatna Mysore is also worth visiting. This island served as the summer fortress of the Muslim ruler Tipu Sultan. The entire bagh has been erected in Indo-Sarcenic fashion and it also consists of few murals that depict the war that Tipu Sultan had with the Britishers. The bagh is famous because of the painting of “Storming of Srirangapatna” that has been exhibited over here. This painting is very famous because it carries the subject of the decline of Srirangapatna when the Britishers defeated Tipu Sultan in the May month of 1799.


Location of Srirangapatna Town: Srirangapatna is just 19 kilometers away from Mysore city. It lies in the neighboring city of Mysore, Mandya. This place can be easily reached by buses or taxis.

Srirangapatna Mysore is a place worth visiting and people who visit Mysore should always make it a point to visit Srirangapatna because of its historical and traditional importance.