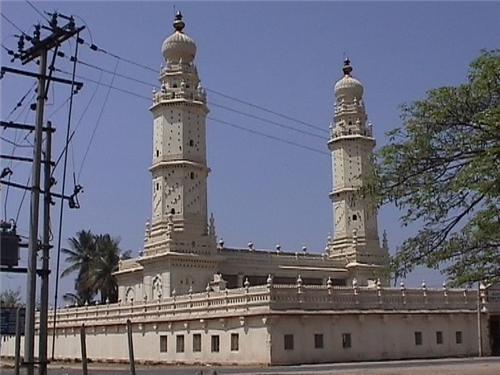 Tipu Sultan Mosque is around 225 years old as it was built by Tipu Sultan in 1784 after he took over as the Sultan of Mysore. The first imamath (Islamic religious course) was performed by Tipu at this very mosque. Tipu Sultan used this mosque for his prayers. The entire mosque is coated earthen yellow and is constructed in royal magnitude consisting of several interesting features. The mosque consists of lofty minarets that are found to be double storied appear as if touching the sky standing on a very high platform. The minarets have an octagonal shape and they also possess pigeonholes that have been surmounted by beautiful domes adding to the magnificence of the whole mosque. The mosque also consists of a court that is completely open and a verandah that is covered. The open court is found in front of the mosque.

Tipu Sultan - the Ruler of Mysore 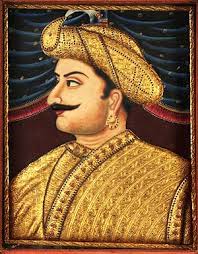 Tipu Sultan was called the Tiger of Mysore because he ruled Mysore for a very long frame of time. He was an able soldier, a poet and also a scholar. Hyder Ali the Sultan of Mysore was his father and Fatima Fakhr-un-Nisa, his mother. Tipu Sultan was Hyder Ali’s eldest son and therefore he got the throne of Mysore after Hyder Ali’s demise in 1782 . Tipu Sultan served as a boon for the city of Mysore because under his supervision and control, there were many changes for the good that were brought about in the city. It was Tipu who introduced a new system of land revenue in Mysore, fresh Mauludi lunisolar calendar, administrative innovations, new coinage and even the development of the silk industry in Mysore.

Tipu sultan was an ardent Muslim though most of his subjects belonged to the Hindu religion and there were very few who were Christians. Tipu Sultan built a church in Mysore only on the request of french community in Mysore. Tipu’s fluency in languages like Persian, Hindustani, Kannada, French, English and Arabic was a masterpiece of his educational and intellectual skills. Tipu got under his name important victories in Second Anglo-Mysore War that was fought opposite the British. The Treaty of Mangalore was negotiated by the British after their defeat in this war. Tipu is popular as the implacable enemy to the Britishers who came in India but his treatment of non-Muslim people within his empire and even the British prisoners remained controversial. Tipu was brutally attacked in the Third Anglo-Mysore War but he was not thrown out of the throne he occupied in Mysore. But Tipu had to face defeat in the Fourth Anglo-Mysore War because of the combined military forces of the Nizam of Hyderabad and the British east India Company. Tipu Sultan was thus killed in 1799 dated 4th May during his defensive ct at Srirangapatna.

There is the Mehrab (semi-circular place in Kaaba direction) located in the west of the mosque and it symbolizes Light: that is Allah. There are Koranic verses inscribed on stone tablets that have been fitted in the main hall of the mosque. One slab that is found in the main hall carries the date of creation of the Tipu Sultan Mosque. The mosque also possesses a prayer hall that is very huge. The mosque also boasts of an inscription that carries the ninety names of the savior Allah. People can use the steps that are two hundred in number in order to get to the minarets. At present, entry to the minarets is completely restricted because of safety reasons. Once you reach the minaret, nothing will be able to stop you from having a splendid and wonderful view of the beautiful environment that surrounds the Tipu Sultan Mosque. The ceilings and the walls of the mosque have been decorated with Persian sculptures that have been finely calligraphed and intricately ornamented.

In the corner of the mosque premises, one will find a very large pond that is rectangular in shape. Cenotaphs are found in the opposite direction of the large pond. The terrace of the mosque possesses a Solar Clock popularly known as a Sun Dial or Sun Clock that speaks volumes about the ingenuity and innovations of Tipu Sultan. The architectural design of the mosque is an assimilation of Islamic and Hindu elements. The mosque also serves as a place for education because there is a madrasa or religious school for the Muslims located within the premises of the mosque. Strict etiquettes are required to be followed by visitors at the mosque.

Srirangapatna town was visited by people in the past but the visitors at this town only made their way towards the Ranganathaswamy temple. But with the emergence of the interesting culture propagated by Tipu Sultan in Srirangapatna, people have started visiting the Tipu Sultan Mosque located at Srirangapatna. The credit for this change in the outlook of the people can also be given to the travel and tourism department of India.